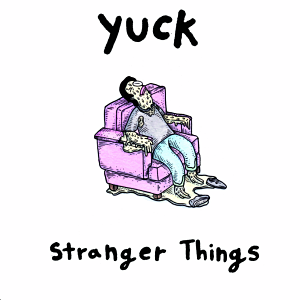 Yuck has produced yet another appetizing collection of songs. Stranger Things marks the band’s third full-length album and the second with guitarist Max Bloom at the helm after the departure of previous frontman Daniel Blumberg. Yuck had not only managed to survive Blumberg’s recession, but decided to go with the change and run, hiring guitarist Ed Hayes and bringing Bloom into the spotlight to produce their more subdued sophomore album, Glow and Behold and a slightly confused Southern Skies EP. Stranger Things, however, gravitates back to the spirit of group’s debut album, Yuck, with the signature energy, fuzz and distorted vocals that were lacking in Glow and Behold.

Unlike Yuck’s previous records, Stranger Things is their first album to not be released via Fat Possum, and was entirely self-recorded/produced in Bloom’s mother’s basement and released under the guise of Mamé Records. This seems to have helped cultivate the raw sound Yuck was previously known for and that was softened during Glow and Behold’s production. Songs like “Hearts in Motion,” “Yr Face,” “I’m Ok,” and “Cannonball” anchor this album to Yuck’s original sound with heavy fuzz-guitar lines and megaphone-esque vocals.

While Stranger Things at times seems to be a homage to their debut album, the combination of Bloom’s distinctly different vocals and a blend of sonically successful aspects of Glow and Behold give this album enough nuance to, more or less, successfully revitalize that Yuck sound fans fell in love with. The four-piece also taps into their softer side with several tracks on this album. Bass player Mariko Doi takes over with her shy vocals for “As I Walk Away.” “Like a Moth” is easily the most subdued track on this album and “Down” features an appropriate synthesizer part that is much more prominent than Yuck has typically allowed.

Stranger Things will likely wind up being viewed as a stepping stone for whatever Yuck decides to do next rather than any sort of revolutionary new album, but that should not discount the quality of this album, or the band. Yuck has yet to put out anything worth disliking. The departure of Blumberg prompted Yuck to experiment for a bit but seems they are finally returning to their roots with Bloom at the wheel this time around.

Recommended If You Like: Dinosaur Jr., Pavement, Sonic Youth, Built to Spill, My Bloody Valentine