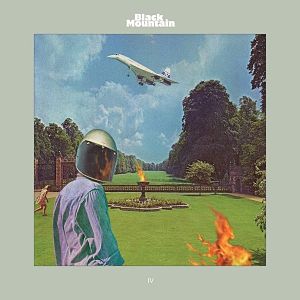 Led by musical mastermind Stephen McBean, of Pink Mountaintops, Black Mountain is a progressive/psychedelic rock band out of Vancouver. This is their fourth full-length and their first one in six years.

For example, there are a couple of tracks that are unabashedly Pink Floydian. Specifically, “Defector” and “Space to Bakersfield” have the spacey atmosphere and guitar solos that sound quite a bit like ’70s and ’80s-era Pink Floyd. What really sets the song apart is the synths on “Space to Bakersfield,” which are more than just a little reminiscent of Disintegration-era The Cure.

And that’s really the strangest thing about the sound on IV: the unashamed classic guitar riffing mixed with the bleeps and bloops of ’80s synths. A lot of the synth sounds would not sound out of place on many original soundtracks from a John Hughes ’80s comedy (see “You Can Dream”). It catches one off guard a little bit during the first time through the album, but after a couple more listens, one realizes how much the synths add to their sound.The most exciting thing about this album is just the huge variety of textures and songs. There are plenty of highs and lows, which makes for an exciting aural journey.

Do Not Play: 7 (Cemetery Breeding)