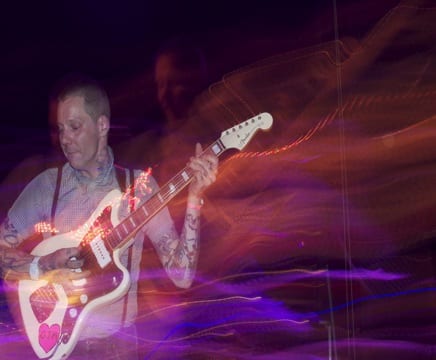 Though we’ve been lucky enough that they more or less frequent our town, San Francisco garage rock greats Thee Oh Sees are always welcome on our streets and stages. This show is the third time that I have been able to see the group play in Lawrence, and definitely in the top three for best yet (humor). I was initially apprehensive about their return to The Granada, the larger venue where they played the second concert where I saw them, since the show I first saw them at was at The Jackpot, where the lively rockers drove the rowdy atmosphere into a frenzy. The last concert they played was awesome in its own respect, too, as they cleverly packed into the middle of the large stage at the Granada to keep the energy tight. This was not the approach that John P. Dwyer, Brigid Dawson, Petey Dammit, Mike Shoun, and Lars Finberg (A SECOND DRUMMER for the group, of The Intelligence) had for this particular showing, where they spread out more and rocked out harder.

This tour is more or less in support of Carrion Crawler/The Dream, which came out 8 November this year, and is freaking amazing, but they might as well still be backing up 10 May’s Castlemania (or even Singles Vol. 1 + 2, a collection released in March this year). It did not matter, as they played songs from all over their discography, including The Master’s Bedroom is Worth Spending the Night In (2008), Help! (2009), Warm Slime (2010), Singles, Castlemania, and Carrion Crawler/The Dream. The group is prolific with recording, and even better in person.

Though, or perhaps because, the show was over Thanksgiving break, the crowd was smaller than expected, still too large for everyone to be able to see at the Jackpot, and all the more energized for the performance. The Oh Sees came in also looking ready for the show, and kicked ass from the start, launching into the song “Contraption/Soul Desert” of the newest album. This brought the energy into the building like a pink and brown lightning bolt lashed along by coachwhips. Yes, I know JPD was not in Lightning Bolt, please just go with it. So anyway, the masses, which may or may not have been washed to start with, start teeming and screaming as the group heads into familiar favorite “Block of Ice”, and we can all tell that “the things [we] love, dear, are taking shape”. The band careens through song after song of marvelous interplay, and it is clear that this is a formidable troop. While Dwyer is typically considered the frontman, everyone gets his or her fair share of the action, with Dawson’s vocals complementing Dwyer’s AND vice-versa on nearly every song, Dammit’s bass throbbing along, and the two drummers certainly do not disappear here – far from it. Yes, the band is in full force, yet they are balanced in attack, playing each part like they know just how it fits between/plays with the rest of the mix in any given measure. This goes on for another fifteen or so songs, before they thank the crowd, finish the song, and leave the stage. This was generously followed by a few songs of encore, giving everyone present something to wear a grin about on their way out into the drizzling night.