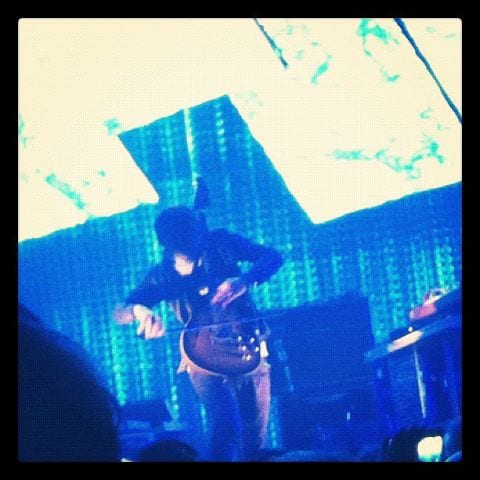 I will be honest. It’s gonna be hard for me to write a good concert review of Radiohead. I remember it just fine, but I saw them from the most rose-tinted of perspectives. After all, I have those 5 englishmen to thank for starting me on my way to “respectable” music taste years ago. Since, I have watched countless concert videos, learned to play their songs on multiple instruments, and set a record for “Most airtime in my car speakers” with an In Rainbows/OK Computer burned CD. However, I am certain that I was far from the only one with that kind of history with this band on Sunday night. Nevertheless, I will try my best to present an objective review.

I will start with the opener, Oklahoma natives Other Lives, a well put-together group of what looked to be about 6 members in total, two of which played stringed instruments for the whole set, which wasn’t for long, but enough to get the crowd focused on the show. When the house lights dimmed at 7:30 sharp, the Sprint Center didn’t really look like it was less than an hour away from a sold out show, with about half of the seats full. When the lights came back up, more seats were filled, but was still far from full capacity. Other Lives played a good show, consisting of their best grandiose melodies, with conviction, and more than likely still thrilled at the kind of venues they get to fill with them. The musicians on stage were glad to show you their tricks, including bows on guitars, occasional trumpet blasts, and an Ondes Martenot. While solid in concept and execution, I feel like I would have been a lot more impressed with Other Lives if I hadn’t been there to see the guy’s who invented those tricks. However, It is really nice to see a band from the middle of the country get such exposure, and the crowd reacted well, as, from the sound of it, a lot of the audience has made the pilgrimage from the band’s home state.

Though the lights went up after the opener, the speakers stayed turned up considerably higher than pre-show, Joy Orbison and Zomby were our reminders. Radiohead is coming.

At about 8:25, house lights go out again. It was time for a crowd of 17,00 to experience simultaneous idol warship. As the first few notes rang out of Thom Yorke’s guitar, the newly revealed backdrop of wall-to-wall lights flashed purple, tinted screen fragments descended from the ceiling as the rest of the band joined in on Bloom. From there, the audience was suspended in their wake, or at least I think they were (see? My jouralistic observations may have been compromised by the show I was observing, I warned you.) 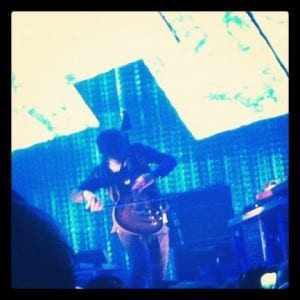 The first part of the setlist ranged from Post-King of Limbs (Supercollider, Identikit) to Kid A (How To Disappear Completely), but, as this was the King of Limbs tour, mostly consisted of tracks from the new album. Though a lot of mixed opinions exist on TKOL the album, their live counterparts leave little to be desired. Live, loud, in a hockey arena, these songs wear a bigger, more forceful suit, that I have to imagine was pretty convincing to those on the fence that Radiohead still possessed what they came to see. It was pretty obvious why Radiohead looked to play indoors on this run through the states, with the thumps of two drummers scattering off high walls, it’s not hard to imagine these sounds being the intent all along. Midway through Identikit, the house lights flicked on, almost perfectly on-cue with the change in the song, all band members looked slightly puzzled, Thom muttered “What. The. Fuck.” into the mic. Less than a minute later, they were off. Not sure if anyone knew why, but most seemed to be okay with Thom’s suggestion of a light tech being asleep and falling over on the controls. After 15 songs, they left the stage.

When 17,000 people welcomed them back, they were greeted with another cut from TKOL, Separator, then taken backwards into some tunes that everyone came to see. I imagine most were as thrilled as I was to hear the district bass drum pattern of Idioteque stream from Jonny Greenwood’s side of the stage, as well as Lucky and, of course, Everything In It’s Right Place, the starting song from my favorite piece of art in existence (Bad review writer! Stop it!)

Once again, after leaving the stage, Radiohead was welcomed back, this time, for the combination of Give Up The Ghost, and OK Computer single Paranoid Android. With that, Radiohead’s first time back in in the KC area since ’95 (at The Bottleneck!) was over.

I think the biggest debate I heard both before and after the concert was about the setlist. I know a lot of people wished they played more from their older catalog, which is understandable given its untouchable quality, but a band must move forward, and with three songs from Kid A, two from OK Computer, one from Amniesiac, and five from In Rainbows, I hardly feel cheated on seeing the Radiohead that taught me so much about music.

Between songs, a fan yelled from the left of the stage “Thank you for coming here!” I think he said what we were all thinking. This was an unexpected treat for a lot of people who thought they were going to have to drive a lot farther away to see this. With the Westboro Baptists protesting outside, it would have been easy for them to ignore us, it’s not like they are short of fans. I know the members of the band probably weren’t too involved with choosing to come here, but they assured us they were happy to be here as well (most bands say that, but when a few members laughed after hearing the vocal fan, I assumed they knew why we would be grateful). It was nice to see a first class show, worthy of the hype, and a lot of people left happy that a band that meant so much to them lived up to their expectations in their less-than-high-profile city. Me included.

Side note: I left with the new song (Identikit) stuck in my head. They most definitely still know how to write catchy tunes.

by marc schroeder (host, Input/Output)
tune in to input/output everything thursday night from 10 p.m. to midnight