A look inside a DIY house helping to keep Lawrence interesting.

Tucked away behind the quiet intersection of 6thand Alabama is a house that’s generating a lot of noise inside it’s moderately sized, well-equipped cellar. The Overlook is a DIY venue whose five hospitable residents open up their home to put on shows at least once a month and, for fans of punk and metal, it brings in bands that you might not come across at your standard Lawrence venues. 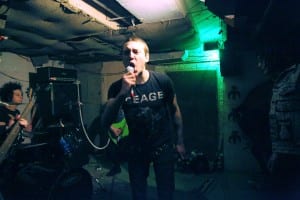 “Living here has made me realize there are a lot of bands in our area that are worth listening to that just aren’t playing as often as they should,” says resident Elise Atkinson.

Some past shows include national acts Phobia, Joyce Manor and Hellbastard as well as local acts like The Rackatees, Beta Maxx and JabberJosh, who consistently play there. Not only do they bring in some bad ass shows but they’re always all-ages, a rarity in Lawrence. There’s also no set cover for shows; attendees just donate what they can to help out touring bands, who receive all the profits.

Resident Nick Schmidt says he still vividly remembers the first all-ages show he attended and adds, “If we could do the same for any one kid who happened to come to a show here then I did my part. You aren’t gonna get the same feeling going to a bar or standing behind bouncers at a club.”

The Overlook is a positive force in the Lawrence music scene. Where else can you intimately enjoy a show, not rack up a $40 bar tab and drag your tween brother along in hopes to introduce him to some decent tunes!? Upcoming shows include Speedwolf on April 9th, Stonehaven on April 20th and West Virginia crust Appalachian Terror Unit in the summer. Anyone wanting to stay hip to upcoming shows, ask questions or just get more info can check out their Facebook page: http://www.facebook.com/TheOverlookHouse.