So you’ve checked out Jazz in the Morning, made some playlists on Spotify, and shoot, maybe you even caught my show on Tuesday night (one can dream, right?!). But you want more! Maybe you’re just looking for a different experience on a night out. Maybe something a little more low-key than the typical liquor-soaked saunter down Mass. Street followed by a nice aspirin sandwich is in order. More simply (and without my assumptions about your drinking habits), a night in KC can be a nice change of scenery.

Most people today haven’t gone to hear jazz in person. It may not be the orchestrated light show with towers of amps and wailing vocals that you’re used to seeing at the Replay Lounge, but it isn’t meant to be. Jazz is based around improvisation and communication. It’s about hearing the band live because you don’t know exactly what they’re going to play, or how they’re going to play it this time. In Kansas City especially, it’s about carrying on and moving forward a local cultural tradition. Jazz has been a part of KC almost as long as barbecue. New York City may be the jazz capital of the world and has an endless supply of musicians, but for its size, I would argue Kansas City has just as much, if not more, quality jazz talent per capita. Here are some of my favorite groups playing right now: 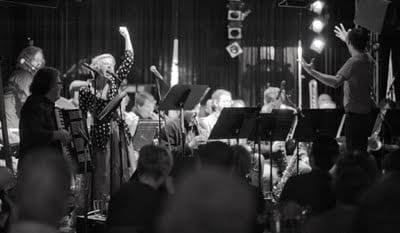 Keyboardist and composer Brad Cox leads The People’s Liberation Big Band the first Sunday of each month at the recordBar in Westport. Their music is a raucous mix of something close to Frank Zappa-meets-Charles Mingus. Outside their regular gig at recordBar, they have made a recent tradition out of morphing into the pit orchestra for the Owen/Cox Dance Company’s modern dance rendition of The Nutcracker and the Mouse King. It’s definitely worth your time come holiday season. Whatever expectations you may have, please check them at the door.

Lowrey is one of the most in-demand pianists in KC and I like him for his incredible versatility. Trio ALL, consisting of Lowrey, Ben Leifer on bass, and
drummer Zach Albetta, plays a mix of standard and original modern jazz, with covers of contemporary music like Radiohead. In the last several years, Lowrey has increasingly collaborated with local hip-hop artists as well, backing up MCs with electric keyboards and a full rhythm section.

I have to admit, this group might not be for everybody, especially if you’re just getting into jazz. Crosscurrent dedicates itself to the music of Lennie Tristano and his musical disciples. For someone with a more developed jazz taste, I can’t recommend this band enough. Matt Otto and Steve Lambert are two tenor saxophonists with contrasting approaches, backed up by pianist T.J. Martley, bassist Zach Beeson, and drummer Sam Wisman. For relative newcomers to the jazz genre, this band’s music can at times come off as dry or academic. I include them in this list because I happen to love the music of Lennie Tristano, and any one of the musicians in Crosscurrent is worth seeing in another group, but bring them all together, and I’ll definitely be there. They have a blog, too!

The New Jazz Order Big Band plays a weekly Tuesday night gig at Harling’s
Upstairs, a second-story bar off 39th and Main. Led by trumpeter and composer/
arranger Clint Ashlock, this band gives you the more traditional big band sound you
may be looking for. Ashlock is a workhorse, often playing the screaming-high lead
trumpet parts, taking extended solos, and leading the band. Almost all the players
are under the age of 30 and prove to any doubters that the future of jazz in KC is in
extremely capable hands.

Have you considered what the fusion of jazz, tango, and traditional Turkish
music would sound like? Right, of course you haven’t, because you have your head
screwed on straight. But sometimes you have to say f*** it and see what happens.

I’m sure Alaturka had a very well reasoned inspiration for its creation, but I enjoy
pretending they took my approach. In all seriousness though, you’ve never heard
anything like Alaturka. Before he moved, darbuka (traditional Turkish drum)
and general hand percussion extraordinaire Sait Arat played in the group. Now
drummer/percussionist (and music director for Quixotic) Brandon Draper handles
the bashing-stuff-in-rhythm duties. Otherwise, they combine the flamenco guitar
and oud (Mediterranean/Middle Eastern lute) of Beau Bledsoe with upright bass
(Jeff Harshbarger), and tenor saxophone (Rich Wheeler). What results from the
musical and cultural blender is a gift. They can go from playing up-tempo and fiery
rhythms immediately to a beautifully lyrical, melancholic melody. Because all of
the members of this group are so busy in other musical capacities, Alaturka does
not have a regular weekly or monthly gig, but when they do play, it’s a trip worth
making. Listen to a full show by Alaturka on KCUR’s website.