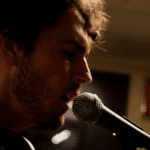 The best live venue is Plow the Fields

KJHK Content·October 10, 2012
Music
Plow The Fields is turning into the most visited venue for local music in Lawrence
By DJ Dirty Shirley
Plow the Fields has been lucky enough to have two in studio performances and interviews in the last two weeks. Oils performed on October 2 and Ebony Tusks performed October 9. Oils is an alternative rock group from Lawrence and Ebony Tusks is a rapper who lives in Lawrence as well. I’ve been impressed with the local talent Lawrence has to offer. On October 16th, Plow the Fields welcomes Pale Hearts to the show and after that, it looks like The Dead Girls and Ashes to Immortality will follow. This week, Plow the Fields was featured on Lawrence.com as part of a tribute blog to local music, so stay tuned for more excitement to come!
Plow the Fields airs every Tuesday from 7-8 p.m.