Paper Ceilings – I’d Prefer Not To

Paper Ceilings is a folk-punk artist from Columbia, Missouri who is known for his catchy melodies and hilarious lyrics. Some of you DJs may recognize his name from the Split EP with Just Nick that was in rotation a few months back. Well, now he’s back on his own with his newest album recorded entirely in his parents closet. Highlights of the album include the track “Ukes Not Bombs” which hypothesizes that if everyone played a ukulele than we will finally achieve world peace. Another great track is “Too Long Didn’t Read” which is about boring people and their boring lives. I highly recommend giving this album a spin, you won’t be disappointed. 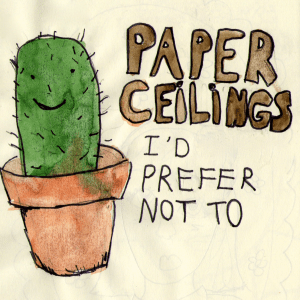