Waxahatchee is the solo project of Katie Crutchfield. 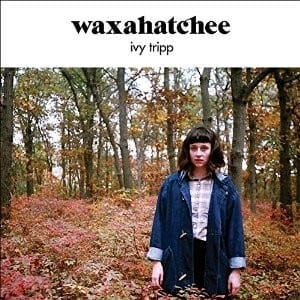 It combines her southern roots, folk punk sensibilities, and lo-fi recording style to make an unique and emotional outlet for her musical talent. Ivy Tripp is her third self-recorded album, and it goes to show that pouring your emotions into your work creates something new and interesting each time.

Her first release, American Weekend, was her most stripped down and lo-fi work with vocals packed with years of deep feelings about everything from broken dreams to pressure of getting married young. Her second and more noticed release, Cerulean Salt, was more indie pop and catchy. This third release still manages to change things up while still holding on to her the brilliant songwriting and great vocals.

Ivy Tripp has an excellent balance of upbeat and downbeat, and minimalist and fleshed out tracks. It’s refreshing. This album overall is not as sad as previous Waxahatchee work, but still conveys the truths of her life in the most intimate of ways. Each song tells a story that is very close and honest to Crutchfield.

My favorite on the album is a tie between the single, “Air,” and the fourth track titled “La Loose.” “Air” has many well-crafted layers and builds in her traditional fashion. The lyrics are wonderfully written with lines like “When I am gone, at least I won’t be thinking” and “When we are moving, we just pretend to be strangers lamenting a means to an end.” “La Loose” on the other end is more upbeat and catchy. The entire song uses a drum machine and a real drum kit, which is an interesting risk in my opinion. It is very minimalist with simple swelling synths throughout. It’s so good.

Two other great songs on this album are “<” and “Summer of Love.” The strangely stylized “<” doesn’t sound as sad as Crutchfield is known to be capable of but when you pay attention to the lyrics it is quite sad. As the emotion heightens, the music behind becomes more and more disoriented. It’s one of her most interesting songs. “Summer of Love” on the other hand is much more simple and folky. It’s happy and fresh. It goes back to the sound of her first album with simple acoustic chords and twangy vocals.

This album is complete and perfect. Waxahatchee will always be one of my favorite women in music because she’s not afraid to take risks and let herself be exposed by her music. That takes a lot of guts.