Regular listeners of The Rinse Out will know my extreme love of Legowelt, Dutch producer extraordinaire. They will also know that I frequently visit Chicago to hit up shows at one of the US’ best clubs, Smartbar. Put the two together and you have one amazing experience. 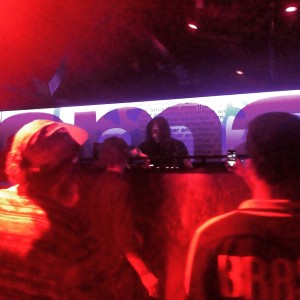 Catching a Legowelt show in the United States is a rare occurrence. You might liken it to a positive experience with a landlord–not something that you expect, but something that you savor when it does happen. So, on of course I made the roughly nine hour trek (or 11 hours if you are dumb enough to drive into Chicago on a Friday evening near rush hour) to the Windy City this past weekend for some good, clean fun (sort of).

Smartbar–if you haven’t been–is, in my estimable opinion, America’s best club. While it is nestled in one of Chicago’s most obnoxious neighborhoods (Wrigleyville), the quality of international acts and amazing soundsystem–a Funktion One that will knock your socks off–make it well worth venturing into the home of the Chicago Cubs.

A guy I hope to be as cool as when I hit 50 on the right.  Photo Credit: Mike Van Esler

Smartbar regulars help create a relaxed atmosphere where clubbers are encouraged to express themselves in a safe space; think more Berghain than (It’s) Brothers. On Friday, there was a man who was at least 50 wearing a bandana, tank top, and Oakley sunglasses breaking it down on the dancefloor all night long. I hope that I am that cool when I reach that age.

As for Legowelt, he put on a stellar show as expected. I would be lying if I said I recognized more than one or two tracks he drew for; however, his technical skills, track selection, and set flow were all to be envied. I won’t say I enjoyed it more than Bicep’s set, but it was darn close. Legowelt drifted between deep house, acid, techno, and ghettotech seamlessly and effortlessly. The Dutch DJ is not only a prolific producer, but also world class behind the decks.