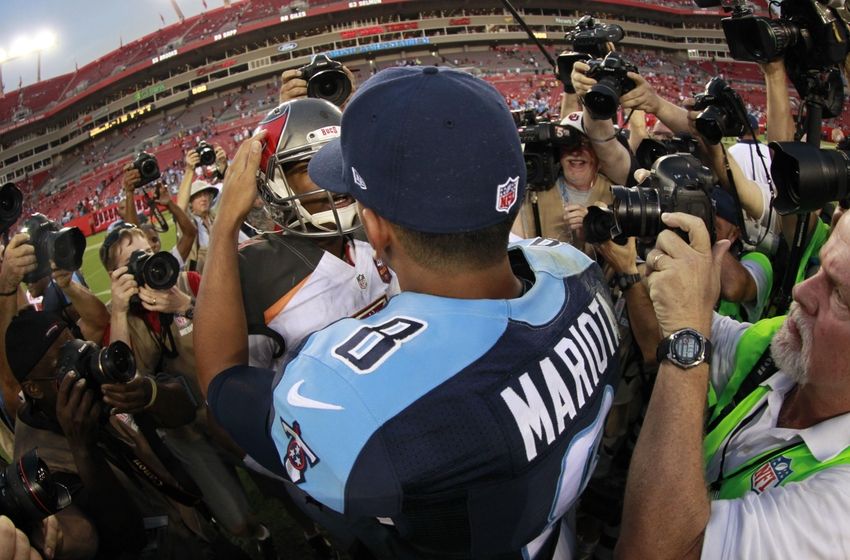 NFL: The True Number One

The NFL Draft started back on April 30. The two clear favorites for the #1 overall selection held by the Tampa Bay Buccaneers was QB Jameis Winston out of Florida St., and QB Marcus Mariota out of Oregon. Many draft experts made the point that the only reason it was close for the number one spot was because of Winston’s off the field concerns. My concerns for Winston on the field are just as big as my concerns for him off the field.

Winston got a lot of credit for winning all but one game in his two year college career, but a lot of people forget how ridiculously talented their teams were. They had a whopping 18 players drafted the last two years. Almost anyone starting at quarterback is going to win a bunch of games with that amount of talent.

Obviously Jameis won the Heisman Trophy two years ago in 2013, but why did he struggle and throw 18 interceptions this past season? This is a question that has been asked of many draft aficionados and their answer is that is because of all the talent he lost in the 2014 draft, saying he doesn’t have the players around him he needs to really be successful.

My response is you had the best tight end in the country in Nick O’Leary. You had a top five receiver in the country in Rashad Greene. You had one of the most talented backfields in football lead by Senior Karlos Williams and Freshman Dalvin Cook who flashed brilliance. You had first round pick Cameron Erving at center. You had a starter at guard for the Patriots now, in Tre’ Jackson. And those are guys that were just on offense last year. That defense saved them games throughout the season when Winston was giving the ball away.

Winston’s decision making was always very questionable at times. The scouts like him because the say he can anticipate defenses well. This past year, however, the defenses were anticipating him.

This is Winston throwing it into triple coverage…

Another forced pass to a locked down receiver, and backed up on his own goal line…

This one is just inexcusable, as he just lobs this one as he is fading away…

Winston has a very strong arm, no question, but his mechanics can often get very sloppy. He has a tendency to take the ball away from his body too far, which makes it take longer for Winston to get it out of his hand, and thus the defender can anticipate the pass and make a break on the ball.

I also worry about Winston’s athleticism. He’s a pretty big guy, as he is listed at 6′ 4″ and 230 pounds. He will remind you somewhat of Ben Roethlisberger, for the fact that he is tough to bring down in the pocket, but other than that, he really isn’t in that great of shape. Take a look for yourself. 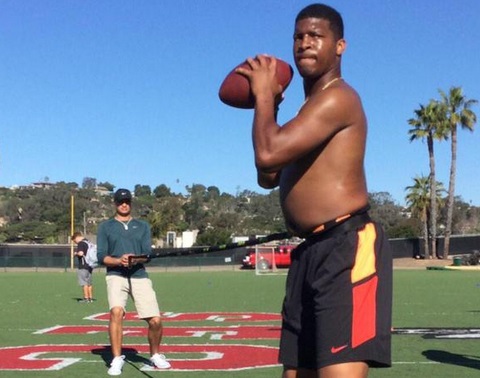 One GM during the draft process actually said, “He reminds me a lot of JaMarcus Russell.” If you don’t know who JaMarcus Russell is, think Jabba the Hut that stole $60+ million from the Oakland Raiders, who took him number one overall in the 2007 NFL Draft. Russell had similar traits to Winston as far as throwing mechanics and body makeup, but I will give Winston credit for being a great leader which Russell clearly wasn’t.

Then we have the off the field issues with Jameis Winston. Where should we start? The rape investigation, the crab legs incident, the jumping on a table in the library and shouting f**k her right in the p***y. He also got into a pellet gun fight with teammates, and inflicted $4,000 in damage to his apartment house. The rape charges against Winston were dropped because there wasn’t enough evidence to file criminal charges.

Tampa Bay this past weekend just had to be thinking to themselves, did we really make the right decision? Well they saw what could have been, as the #2 overall pick, Marcus Mariota and his Tennessee Titans, demolished them 42-14.

Winston has now two losses since his Junior year of high school, and both have come against Marcus Mariota. The other loss was in Winston’s final game at Florida State in the Rose Bowl against Mariota’s Oregon Ducks, and Winston gave us all this play that has been created into so many clever memes.

Now lets look at who really should have been the #1 overall selection, Marcus Mariota.

Marcus Mariota was born in Honolulu, Hawaii. He played his high school football for Saint Louis High School in Honolulu. He was only a three star recruit coming out of high school and only had two college offers, one was Memphis, and the other was, of course, Oregon. More amazing was the fact that when he received his scholarship offer from Oregon, he had yet to start a game in high school. Former offensive coordinator, and now head coach of the Ducks, Mark Helfrich, went to Honolulu to watch him at a camp, before his senior season. Immediately after that, Helfrich called former Oregon head coach Chip Kelly, who is now the head coach of the Philadelphia Eagles, to tell him they had to offer Mariota a scholarship. They sure did make the right call.

Mariota would redshirt his first year in Eugene, but would take the starting job the next year and parlay that into an incredible college career. He threw for over 10,000 yards and had 105 passing touchdowns, while only throwing 14 interceptions. Those 14 interceptions in his career are four less than Jameis Winston threw just in his past year alone. His final season was his best, as he took home the 2014 Heisman Trophy with a host of other awards, as he compiled 58 total touchdowns, while leading his Ducks to a Rose Bowl Victory and a spot in the National Title Game. 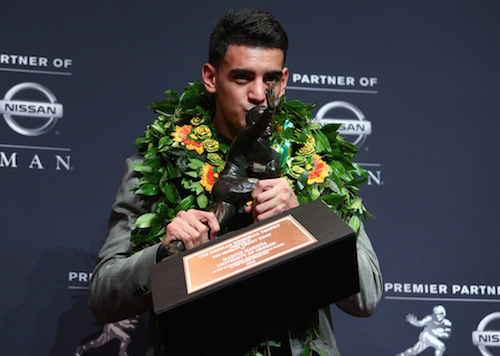 It wasn’t good enough to satisfy most NFL Draft experts, however, who thought he played in a gimmicky offense, in which he was always throwing to wide open receivers, without having to really read defenses. It’s not like it was his fault that nobody was able to keep up with their fast paced offense, and cover receivers all the time. Saying however, that Mariota did not read defenses, could not be further from the truth.

The whole purpose of the Oregon offense is put the opponent on their heels and get their athletes into open space. To do this you must constantly read the defense, which Mariota was so prolific at. He always made the correct call on whether to keep the ball, hand if off to a back, or find an open receiver on the many option plays he ran at Oregon.

When he uses his speed, he can outrun everyone on the field…

Watch his pocket awareness and accuracy while on the run…

He has such an ability to make something out of nothing, look at this heads-up play…

You also have to look at the players Mariota was working with this season. They lost their best two receivers from the prior season in Josh Huff (NFL Draft) and Bralon Addison (Torn ACL). The leading receiver for the Ducks this past year, played running back last year in Byron Marshall. The line was average at best after left tackle Jake Fischer and center Hroniss Grasu. A majority of the skill position players had no experience in close games. You could only imagine what Mariota would do if he had the weapons and offensive line that Winston had.

Mariota’s throwing mechanics are much more consistent that Winston’s. Mariota always keeps the ball high, and doesn’t let it dip below his waist. Tony Dungy said that Mariota reminds him of Aaron Rodgers. I think that is probably his closest comparison to an NFL quarterback. He is obviously not to Rodgers’ caliber, as no other quarterback in the league is, but he has a compact, quick release similar to Rodgers mechanics.

Mariota can be incredibly accurate, even on the run…

How many times have we seen Aaron Rodgers do this and fire a back shoulder throw to Jordy Nelson on the run. Are these not “NFL caliber throws” scouts? The assertion made that Mariota doesn’t have the same “arm talent” that Jameis Winston has is just flat out false.

Maybe it’s just the fact that Mariota never lined up under center in a “pro” style offense, that scared some people off. Or maybe there was just nothing else they could find wrong with him, so they just had to blame the offense he played in for his success. Just stop.

Mariota also gets knocked down because he is a more reserved and quiet individual. People wonder if that he can have “huddle presence” or whether he can lead an offense, or he can lead a team. He sure did it at Oregon. If you asked everyone on that team who the leader of the team was, the finger would get pointed at #8. Even though he never huddled, and plays were given to him with cards and signs, he was always responsible for moving people around and putting them in the right spots to be successful. 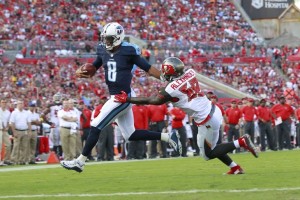 Tennessee head coach Ken Whisenhunt was most impressed with how smart Mariota is as a player. That was always what was most impressive about him in college for his two head coaches Chip Kelly and Mark Helfrich as well. It’s really his best asset. He knows what defenses want to do against him, and his dual threat ability leaves openings in the defense for Mariota to exploit with his deadly accuracy.

Mariota just flat out is the total package. He is accurate from the pocket, accurate on the run, has separation ability with his feet, he puts defenses on their heels, he is a model of consistency, and he is extremely smart. He really is the type of guy you want to be your franchise player. The Tennessee Titans were extremely lucky to get a player of this caliber with the #2 overall selection.

The Tampa Bay Buccaneers may look back on this draft, and forever regret the decision they made to pass on Marcus Mariota and select Jameis Winston.  To this point, that is exactly what has happened.