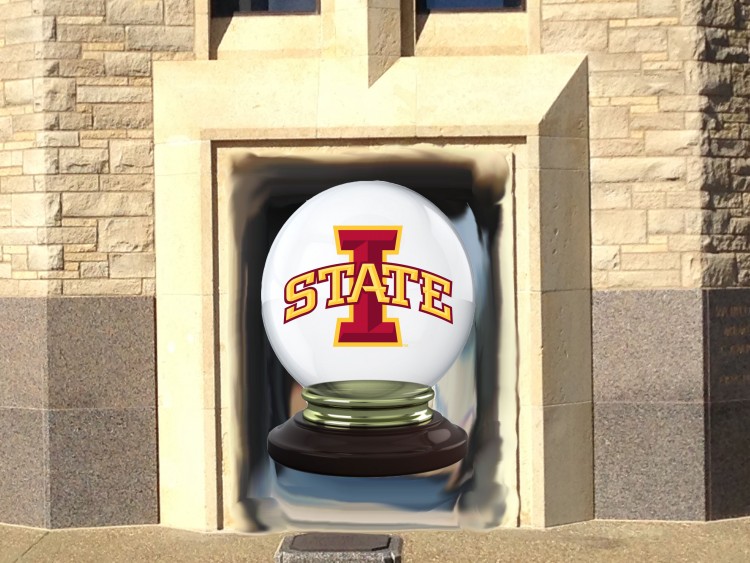 The Iowa State Cyclones and the Kansas Jayhawks have a lot in common when it comes to their football teams.

Both teams won their last bowl game against Minnesota in the Insight Bowl, with Kansas winning in 2008 and Iowa State getting the dub over the Golden Gophers in 2009.

Both teams have struggled finding recent success and haven’t been able to put together a winning season since their last bowl wins. Since 2008, Kansas has gone a combined 25-60 while Iowa State has racked up a dismal 31-56 record.

Last year, both teams met late in the season without a Big 12 win, a fate that may have very likely repeated itself if it weren’t for Saturday’s game being the Big 12 opener for both squads. Kansas was able to secure the victory last year (their only Big 12 win of the season) and the Jayhawk faithful euphorically tore the goalposts down.

So this Saturday, at Jack Trice Stadium in Ames, two teams who have traveled down similar roads in recent years will look to go their separate ways. Iowa State will look to improve to 2-2 and gain some positive momentum before facing two conference and national powers in Baylor and TCU. Kansas, on the other hand, will look to recreate what happened last year and prove to Jayhawk fans that greener grass is indeed on the way.

Iowa State finished last season in a position that many predict Kansas will finish this year: winless in the Big 12. But even that Iowa State team was able to muster up two non-conference wins, a feat Kansas was unable to do this year.

This year, Iowa State has gotten off to a slow start. Their only win so far has been against FCS foe Northern Iowa. They’ve dropped their other two games against Iowa and Toledo, both of which were teams Iowa State defeated last year.

Iowa State returns an experienced group of players to their offense, with nearly ever position returning last year’s starter. While last year’s offense wasn’t the biggest of threats to Big 12 opponents, only averaging 23 points per game, it never hurts to have major positions, especially at quarterback and along the offensive line, have experienced upperclassmen starting.

Senior QB Sam B. Richardson has gotten off to a decent start this season, throwing for nearly 750 yards passing with 5 touchdowns and only 1 interception, which is to be expected considering the Cyclones returned the majority of their wide receiving corp from last year. The main question to this Cyclones offense will be whether they can find success with their running game, something they’ve struggled to do so far this season. To do that, they will need to find a replacement for last year’s starting running back Aaron Wimberly.

On the defensive side of the ball, Iowa State has to replace a lot of core components, primarily among the front seven. Though considering Iowa State allowed nearly 250 yards rushing per game last year and 35 total rushing touchdowns, a fresh start at those positions was needed anyway.

The secondary, on the other hand, held opponents to only 282 yards passing and only gave up 20 passing touchdowns last year, a tremendous feat considering how dangerous Big 12 opponents are in the passing game. Of that secondary, cornerback Nigel Tribune and free safety Kamari Cotton-Moya return. Tribune and Cotton-Moya alone accounted for 141 total tackles, 5 interceptions, 21 break ups and 24 pass deflections. Also returning is cornerback Sam E. Richardson who snagged 4 interceptions himself.

Part of a very dangerous Iowa State secondary, Nigel Tribune is known for being a pest to opposing quarterbacks. Tribune had an outstanding season last year that saw him earn Second Team All-Big 12 and ESPN’s Big 12 All-Underclassman honors. Tribune led the Cyclones in pass breakups, tallying 13 in total which was good enough to rank him sixth in the nation in that category. He was also second on the team in interceptions and fifth in tackles. With the Jayhawks still struggling to find consistency in the pass game, Tribune could be a major headache for Cozart and company.

Richardson had one of the best seasons by a QB in Cyclone history last year. He averaged 23 completions per game which was good enough to rank him third in the Big 12 and 13th in the nation in that category. He also set a school record for completions in a season with 254. Not only does he have an accurate arm, but he also has mobile feet. He’s one of only four quarterbacks in the history of Iowa State football to rush for over 1,000 yards in his career, and last year he was third on the team with 356 yards rushing. The KU secondary will have to bring their A game if they wish to slow down this dual threat QB.

As if the Iowa State secondary wasn’t dangerous enough with Nigel Tribune, the Cyclones also have Big 12 Defensive Freshman of the Year Kamari Cotton-Moya to pair with him. The star of the Cyclones defense, Cotton-Moya had a breakout freshman season last year as he led the team in tackles with 77 total. He also added 2 tackles for a loss and 8 pass breakups to go with all of those tackles. He had 12 total tackles alone last year against the Jayhawks. He already has 23 tackles for this season, including 2.5 tackles for a loss, and will be another problem that the Jayhawks offense will have to solve if it wishes to be successful Saturday.

The number 5 must be a good number in Ames because it also happens to belong to one of their most talented wide receivers in Allen Lazard. Like Cotton-Moya, Lazard also had a breakout freshman campaign last year and was named to the Big 12 All-Underclassman team. He was second on the team in receptions (45) and yards receiving (593), which placed him second all-time in both categories for an Iowa State freshman. Lazard should be excited to see the Jayhawks again as it was against them that he scored his first career touchdown while totaling 70 yards receiving. Look for QB Richardson to target this big bodied sophomore all day long against the Jayhawks secondary.

Dale Pierson is off to a monster start to the 2015 season. After a relatively quiet Cyclones debut last season after transferring from Pasadena Community College, Pierson is putting up numbers that would make J.J. Watt blush. In just three games this season, Pierson, who goes by the nickname Sack Mamba, has 15 tackles, 6 tackles for a loss, 5 sacks and 1 interception. Though a bit undersized for a defensive end, Pierson is a one man wrecking crew and is quickly catching people’s attentions. The Jayhawks offensive line will need to pull out all the stops if they wish to keep this man from getting in the backfield.

Wave The Wheat If…

The defensive line gets in the opponents backfield and knocks someone, anyone, down. After initially being considered one of the Jayhawks few strengths coming into the season, the defensive front has immensely struggled to get any pressure on opposing backfields. Ben Goodman is the only defensive lineman to have a number higher than “1” in the quarterback hit, tackle for a loss, and sack categories. The entire Jayhawks defense this season only has 8 tackles for a loss and 5 sacks. Getting pressure in the backfield isn’t just important for this game, but it’s important for the rest of the season due to the inexperience in the KU secondary.

Plough The Field If…

Consistency problems continue to plague the KU passing game. Cozart has looked brilliant at times this season, but he has also looked confused. While the offensive line hasn’t always done him favors protecting the pass, Cozart himself needs to step up and start delivering accurate throws on a consistent basis. Iowa State has one of the better secondaries in the league, so if KU can’t get a rhythm established early on, it could be another long day for the Jayhawks.

KU hasn’t had a victory against Iowa State in Ames since 2008 and I don’t see that streak ending this year. Iowa State will avenge its loss from last year and keep a zero in Kansas’ win column.