Tacos from SoCal in LFK

Opening a small pop-up stand outside on the patio at Replay Lounge a couple years ago, Taco Zone has been a familiar face for Lawrence residents for a while now.  In May, however, the late night taco spot expanded to a brick-and-mortar location on 8th St., in between Henry’s and Sandbar. 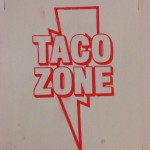 Open year-round and with regular daytime hours, Taco Zone has used its new space to not only expand its taco offerings, but to also sell a wide range of food and beverages, including tortas, burritos, margaritas, and agua fresca.

Taco Zone prides itself on creating authentic, southern Californian tacos, so those expecting an abundance of rice or cheese on their tacos should be forewarned.  However, don’t let that be a deterrent: these tacos are some of the best Lawrence has to offer.  The menu is always in flux which means that customers can expect to try out a different variety of tacos somewhat regularly.  In particular, the refried black beans con queso are a delight and sure to make vegetarians happy.  The custom salsa, which is not overly spicy and a little sweet, provided with each meal is a nice bonus, as is the artful crafting of ingredients on top of the corn tortilla. 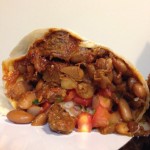 However, it’s not just the tacos that are great!  The burritos are also worth checking out.  Those used to Chipotle burritos may be in for a shock, but Taco Zone burritos eschew rice and cheese for hearty helpings of meat (or veggies), beans, and pico de gallo.  The burritos also come with Taco Zone’s house salsa which perfectly complements the inner-dwellings of the burrito.  In particular, customers might want to try the chile rojo steak burrito, which is just the right amount of savory.

Lawrence residents who are interested in exploring a different type of taco and Mexican-inspired fare should definitely take the highway to the Taco Zone.