Featured Concerts: Chance The Rapper and The Social Experiment at The Midland 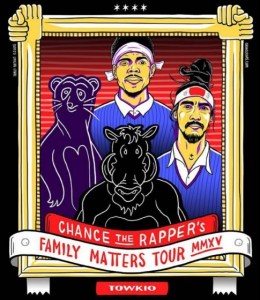 The Family Matters tour put on by Chance The Rapper and The Social Experiment was a beautifully colorful experience. The sold out show was wrapped around the corner of The Midland in Kansas City, and once the spiraling line of anxious fans filed onto the floor it became packed shoulder to shoulder all the way up to the very top of the balcony. Creating an engulfing all the energy in the room, Chance started off his set with tracks from his first mixtape 10 Day. Responding instantly, the crowd went wild repeating each lyric along with Chance.

Looking down at the sea of bodies in the crowd swaying back and forth while bumpin’ to Chance’s tunes was an incredible sight, as was the feeling of the balcony on the verge of breaking from the intense bouncing of everyone vibing with the performance. It was the best kind of sensory overload when combined with the visuals of the show.

Continuing to get more hyped up as songs from Acid Rap started to emerge, The Social Experiments stage presence was inspiring. The connection Chance had with with the audience and the way he spoke about his music was so genuine, you could really feel his passion. Before playing “Cocoa Butter Kisses” he opened up with saying that he wanted to sing it the right way, the way it deserved to be sung, really engaging with his fans letting them know this was their song and this was their moment to go all out. With no disappointment the stage, the crowd, the entire venue shook with uncontrollable elation.

The continuance of his performance was just as compelling as he danced around stage surrounded with flashing lights and saturated video projections that enveloped the space around him. The imagery projected related to each part of the song he was performing, which is a relationship that was extremely captivating.

If you’re unfamiliar with Chance and The Social Experiment I’d suggest checking them out and if the opportunity presents itself go to a live show because the experience you’ll have will be sensational.