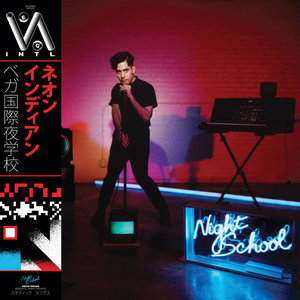 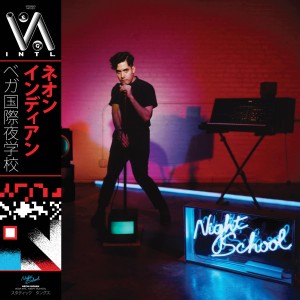 Alan Palomo of Neon Indian has returned to the electronic world bearing the gift of the fluid and cyclical psych-pop LP Vega Intl. Night School. It’s success was looming long before the release, starting when the first single, “Annie,” released back in late May. Prefaced as well by singles “The Glitzy Hive” and “Slumlord,” the album was released collaboratively by Mom+Pop Records and Transgressive Records on October 16th. It comes four years after the release of Era Extraña, and six years after the beloved low-fi Psychic Chasms.

Reminiscent of his earlier two albums, Palomo grounds the expanding sound of Neon Indian with a collage of 80’s synthesized psych-pop, but experiments in soundscapes of the 8-bit, jungle psychedelic, and even stranger varieties. The fuzz and low production value of the first two releases is still around, but has been melded into a specific sound instead of an overall production quality. That sound is used fleetingly in juxtaposition to crisp, driving breaks where every layer of a song has been polished, emerging out of the fuzz at the perfect moment. Vega Intl. Night School has more of a pop sound than the earlier two albums because of this and Palomo’s vocal work.

“Slumlord,” exemplifies this mix of fuzziness and crispness, beginning with a long build where synth pumped with reverb oozes and expands, then suddenly tightens up and combines with the down beat of a bass drum. It’s entrancing and catchy as all get out. Definitely a track that forces a body to move, or at least elicit a modest head nod and foot tap. But then, so do the rest of the tracks.

The definitive single of Vega Intl. Night School is “Annie.” It has a catchy hook and melody, strange yet entrancing psychedelic jungle noises, and rad percussion.  “Techno Clique” runs in that same single worthy vein but with more of a house sound; it belongs drenched in smoke, sweat, and bodies moving in rhythm with reverberating vocals and bass.

“Street Level” is, comparatively, one of the slower tracks of the album. Still driving with energy and a complex sound, just strung out a bit more. It deconstructs itself and slides wonderfully into “Smut!”, another calmer track drenched in reverb and spacey effects. These two are best enjoyed in succession. Really, all of the tracks are. The transitions are impressive throughout. Overall, Vega Intl. Night School digs Neon Indian a notable, habitable furrow further into the subterranean world of experimental electronic and synthesized sound. Enjoy moving to this!