The String Cheese Incident: Rhythm of the Road Volume 2 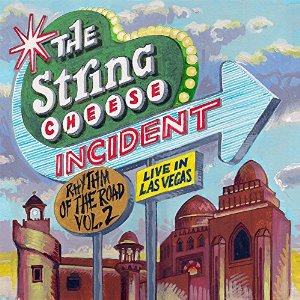 Rhythm of the Road Volume 2 is the latest release from widely known Boulder-based jam band called The String Cheese Incident. Made up of Billy Nershi on guitar, Keith Moseley on bass, Michael Kang on electric mandolin and fiddle, Kyle Hollingsworth on keyboards, and Michael Travis on drums, this album is the second of a series of re-mastered live recordings. This volume takes us to a weekend cemented firmly in the peak of the band’s career. 2001 is recognized as one of the best years in the band’s history and this show proves why this is the case. Rhythm of the Road Volume 2 in particular has a set list filled with classic after classic from their catalog and a few surprise covers.

The String Cheese Incident thrives on spontaneous moments where the listener never knows what is going to happen next. They feed off of energy and pushing it to the limit with improvisation. That is the excitement behind this band. They held nothing back in Vegas and created many special moments during their two-night run at the Aladdin Theatre.

“San Josè” is a very joyful rendition that feels like a sunny paradise; a track reminiscent of a Paul Simon sound. “Got What He Wanted” is classic String Cheese Incident. This song defines who they are and how their spontaneous moments can change on a dime and vary from genre to genre. “Skat” is a personal favorite and is on the list of essential String Cheese Incident songs. The use of the fiddle by Michael Kang is easy to love. “Freedom Jazz Dance” by Miles Davis and “Get Down Tonight” by KC & the Sunshine Band were two huge, bust out covers they performed. The horn section during “Get Down Tonight” was particularly powerful and made the cover sound full. “Come As You Are” is not the Nirvana cover that comes to mind immediately upon seeing the title but it is still very worthy of a play. “Mouna Bowa” has always had a feeling of being on the beach and has a very “island” essence. Many of the songs contain this cheery vibe.

The String Cheese Incident is far removed from this show, but it is nice to go back and listen to the glory years of the band. You will notice a big change in sound if you were to see the band now. They have drifted more towards the electronic or “jam-tronic” genre but still play many of their previously established classics. The band is firing on all cylinders throughout the album and Rhythm of the Road Volume 2 is high-energy throughout.

Recommended If You Like: Phish, Miles Davis, Paul Simon, Strength in Numbers