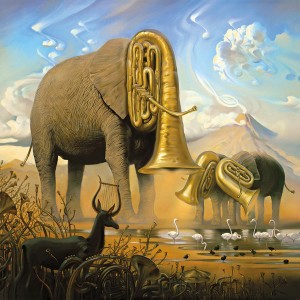 Lettuce’s highly anticipated fourth studio album from Royal Family Records, Crush, has arrived and it does not disappoint in the slightest. With stone cold groove after stone cold groove, Crush exemplifies the same grounded roots and sounds of previous albums but with a little more of a hip-hop and exploratory vibe to it than before. Born and raised in Boston at the Berklee College of Music, Lettuce has proven itself on the live circuit and is known for its party vibe at concerts and festivals. The deep, grooving bass lines and funky horn melodies make you want to dance and groove to the music non-stop. Composed of Erick Coomes on bass, Adam Deitch on drums, Adam Smirnoff on guitar, Nigel Hall on keys, Ryan Zoidis on saxophone, and Eric Bloom on trumpet, Lettuce is a force to be reckoned with in a live or studio setting.

Crush feels like a newly energized band with a lot to prove. “The Force” is an epic start to the album. Huge horn lines echo through out and harmonize with the standout bass line perfectly. “Get Greasy” is, like most songs on the album, very bass heavy. “Phyllis” uses heavy reverb and delay on the guitar to create an ambient vibe that is present throughout the track. The horn lines mesh with the bass and create a dub-like feel. “Sounds Like a Party” is one of the few songs off the album that has vocals on it. Nigel Hall really shines on this track and leads the band through a complicated melody and impressive vocals. “Pocket Change” has a super catchy melody line and is one of the old school Lettuce tunes off the album. The horns really shine and lead the band through the complicated melodies and different solo sections. There is one point in particular where the saxophone is soloing over strictly the drums and it creates a very cool breakdown feel. Crush is a very easily listen and flows very nicely from track to track with interludes to help the flow from song to song.