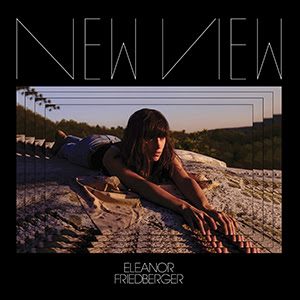 Eleanor Friedberger, possibly best known as one half of the Fiery Furnaces, continues to strike out on her own with New View, now out through Frenchkiss Records. Following in the vein of her first solo album released in 2013, Personal Record,  New View is a classic singer-songwriter album harkening to the likes of Cat Stevens or Joni Mitchell. Overall, the album flows along to the vibe of early folk rock updated with an indie rock and occasional psychedelic rock influences.

Friedberger’s songs offer many emotions and stories listeners come to be familiar with when listening to a singer-songwriter album. However, this familiarity is more of a weakness than a strength here because Friedberger’s lyrical ability has not yet reached the level of some of music’s greater singer-songwriters (Joanna Newsom, Bill Callahan, etc). Friedberger’s songs can get stuck in cliché language that while relatable does not quench the thirst of listeners looking for something new. Take the lyrics in “Sweetest Girl,” “The sky is red and so are your eyes / from crying /crying crying / The sea is blue and so are you tonight.” There is an attempt here to connect colors with emotions as well as natural imagery, all to expand upon the intensity of the emotion. However this type of writing is stereotypical and it takes away from the power of the message. The words used in many of these songs may be simplistic, but that’s only because we’ve become so used to this type of language.

At the same time, this album provides a glimpse at how great a songwriter Friedberger could become. For instance in “All Known Things,” “And at the exhibition / in the womb of the museum / I paid for your admission / But no kissing in the mausoleum / and even if you had a twin / I wouldn’t notice her or him / Your beauty stands alone amongst all / known things.” This lyricism combines the beauty and humor of real-life situations and elevates them, letting you almost experiencing the emotion yourself.

Overall, New View is a fun album worthy of a listen the next time you’re walking at a park or cooking dinner. Friedberger may lack some of the experimentation that was common during her tenure with Fiery Furnaces, but she shows here that she can make lovely music on her own.

Recommended If You Like: Fiery Furnaces, Cat Stevens, Cat Power