Raoul Bjorkenheim/eCsTaSy: Out of the Blue 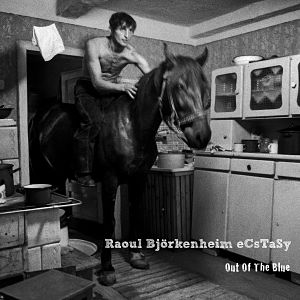 With an unreal level of musical coherence and communication, Raoul Bjorkenheim and his eCsTaSy quartet has delivered a wonderful and refreshing improvisation-based album with Out of the Blue. The experienced 60 year old Finnish-American guitarist draws upon a plethora of styles, influences, and textures to delicately craft this album while still remaining spontaneous. His playing on this album ranges from exotic to nordic to Hendrix. Joining him are Pauli Lyytinen on baritone, tenor, and soprano saxophone, Jori Huhtala on bass, and Markku Ounaskari on drums.

Out of the Blue is quite a bit of fun to listen to because there is so much going on in every song. Each track has a very distinct texture and story to tell. For example, Pauli Lyytinen’s tone in “A Fly in the House of Love” is gnarly—his saxophone emits a sound that eerily matches the buzzing wings of an insect, hence the “fly” in the “house of love.” The group also embraces their Finnish roots with the distinctly Nordic sounding track, “Roller Coaster.” Other tracks like “Uptown” and “Quintrille” feature Bjorkenheim’s distinct blues and Hendrix influenced improvisation style. The improvisational communication on Out of the Blue is top-notch. All of the players are flawlessly feeding off of one another’s ideas and energy—a skill that takes years to hone and develop.

Out of the Blue is a smorgasbord of hand picked ideas that are explored with the improvisational prowess of Bjorkenheim’s quartet. Each song paints a visual picture when listened to which is something avant-garde artists can rarely accomplish due to the wild and abstract nature of the genre. Raoul Bjorkenheim and the eCsTaSy quartet seamlessly blend “inside” and “outside” playing in Out of the Blue to create an experimental jazz album for the likes of even the more conservative jazz listener.

Recommended If You Like: John Scofield, Ornette Coleman, John Coltrane