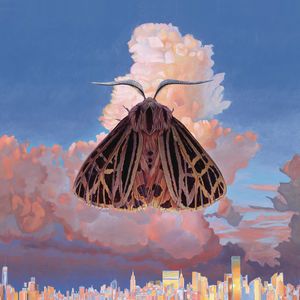 Chairlift’s new album, Moth, is out through Columbia Records is everything listeners have come to expect from the indie-pop duo based in Brooklyn. Building on many of the same themes and stylings of their first two albums, Moth could be Chairlift’s first great album, and a personal early candidate for album of the year. Consistency throughout the album is largely to thank for this progression from the earlier albums. While both Does You Inspire You and Something have a majority of excellent songs on them, they are still brought down by the occasional clunker. This could be due to the fact that, at forty minutes, Moth is relatively short but editing is a skill, and while this album may leave you wanting more it does not feel as though anything is missing.

The two singles for this album, “Ch-ching” and “Romeo,” are perfect examples of Chairlift’s ability to write rhythm based pop songs that will keep you dancing. It is their use of unusual language and romantic imagination that sets them apart from other pop bands. For example, in “Polymorphing,” “Fill her up with serotonin/ pyrotechnic, oxytocin/ overdosing, polymorphing/ in the sense within the warzone/ undercover in the ozone/ bungee jumping on the upswing.”  Chairlift may have a monopoly on using scientific terms to create something that feels like magic. Instead of sterilizing the songs into something cold and obtuse, these scientific words sound like the magic potions that are all around us that could makes us feel happiness or passion at any time.

Their strong sense of romanticism can be seen in numerous of the songs on this album, but perhaps the best representative is “Crying in Public.” Mainly focusing on the intense feelings of falling in love with someone, the songwriting enlarge the feeling by exposing the rawness of the situation and equating it with crying in public. “Like the peach you split open / with two thumbs / I’m the half without a stone / and my heart is a hollow / with a space for your own / (or whatever you want to do with it) / And I’m blaming all beauty upon you / from the birds at my feet / to the breakdancing boys / and their boomboxes’ beat, beat, beat.” Romanticism reigns free in the world of Chairlift, and while they may not always have their love reciprocated they can see the magic all around them.

Recommended If You Like: Neon Indian, Class Actress, The Bird and the Bee