Featured Concerts: Galactic and Soulive at The Fillmore Auditorium

The lights dimmed at 8:30 p.m. on Saturday, February 20 in The Fillmore Auditorium in Denver as The Suffers took the stage dressed entirely in black with the exception of lead vocalist Kam Franklin, singing and shimmering in silver. With Soulive and Galactic to come, a lively opening presence is expected but not always guaranteed. The Suffers built a rapport the two previous nights opening for Galactic in Fayetteville and Lawrence and will join them for the rest of the tour. With Soulive only appearing on the Denver stop, they inevitably heightened their performance and exceeded expectations. 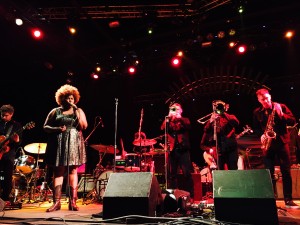 With pipes comparable to Brittany Howard of Alabama Shakes, Franklin was backed beautifully by a robust band and choreographically disciplined horn section. As a ten-piece soul band that conversely tries to exceed that classification, the Suffers even took the time to break out a Selena cover in their unfortunately short set that left the crowd wanting more. The band confessed that they had been told all too many times that a group like them ‘simply would not make it’ or ‘just couldn’t tour,’ though it was a confession coming during the band’s seventh tour at their 165th show at the largest venue in Denver that they had ever played.  Not to mention performances at NPR’s Tiny Desk, Austin City Limits Music Festival and The Late Show. The band’s 2015 EP, Make Some Room, features some selections found on their self-titled debut full-length album which was released independently in the second week of February and was sampled in a set lasting roughly 30 minutes alongside new material. 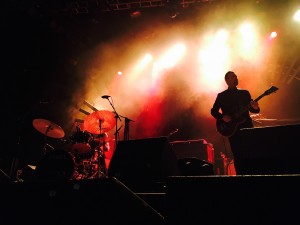 With some of the Fillmore’s vast floor still uninhabited, the Suffers concluded and the auditorium gradually filled out in anticipation of Soulive. The jazz/funk trio, active since 1999, first became akin while attending a summer music program at the Berklee College of Music in Boston. Soulive is comprised of Eric Krasno on guitar, Neal Evans on clavinet, organ and bass keys with his brother Alan Evans on drums. Though the band is now based in Brooklyn, the city of Buffalo celebrates Soulive Day on July 9 every year. Upon their arrival to the Fillmore stage, the band quelled the worries of those who seemingly could not bear the wait in between sets and wasted no time getting into deep cuts, like the second track of the set, “El Ron,” from 2003’s Soulive. Brother Alan took a drum solo a bit later in the set giving Neal and Krasno a breather only for the two to jump back on again as the band dove into “Spark,” the title track of the band’s 2012 full-length. With the show being somewhat of a special occasion and an atypical set schedule, the crowd did not know how long Soulive would grace the stage but with their proverbial lunch pails in hand, and Krasno with his signature Ibanez EKM10T, the New Yorkers grooved for around 75 minutes. Soulive’s next gig is more than a month away in Philadelphia, where they will rejoin Galactic. 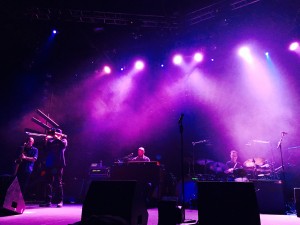 After the extensive stage breakdown following Soulive, including but not limited to hauling away Neal Evans’ behemoth funk station, Galactic and its ensemble took the floor. Started in New Orleans in 1994, Galactic remains predicated around its founding members; Jeff Raines on guitar, Stanton Moore on drums, Robert Mercurio on bass, Ben Ellman on saxophone and Richard Vogel on keys with the more recent addition of fellow New Orleans trombonist Corey Henry, affectionately known as Boe Money. Galactic is a band that always tours with featured artists and toured with Macy Gray over the summer. This time they were joined in Denver by the legendary soul vocalist Cyrille Neville of the Neville Brothers, New Orleans vocalist Erica Falls and Eric Krasno, only for “Cineramacope”  where he and Henry freestyled instrumentally. Other material in the set came from Galactic’s most recent full-length, Into The Deep, released in July of 2015 as well as tracks from 2010’s Ya-Ka-May and “Out In The Street,” a song Neville recorded with Galactic on 2012’s Carnivales Electricos. There were no Stanton Moore solos to be had this time around but let it be known that this pivotal percussionist is still Galactic’s glue. Galactic followed up their Fillmore performance in front of a sold out crowd in Aspen and are currently slated to tour through the summer and into September.