From The Vault: La Noche de Los Asesinos (aka Night of the Assassins) (1974)

First, a word about this feature. Henceforth, all of my movie reviews will be written under the title From the Vault. The criteria for selected movies include: arthouse, exploitation, or otherwise relatively unknown titles; if the movies are American, they must be from prior to 1975, the year Jaws was released and the blockbuster was born; and if the movies are from the rest of the world, they must be released no later than 1978, the point by which the blockbuster had penetrated the global cinematic consciousness.

The purpose of this feature is to expose KJHK listeners, users, and viewers to cinematic traditions outside of contemporary arthouse and Hollywood cinema. Many of the titles may be hard to find, but part of the beauty of cinephilia is the satisfaction of finding mythical titles after hours, days, or even years of searching; I believe this is even more crucial in an era of on-demand media.

Jess Franco (aka Jésus Franco) is perhaps one of the most interesting Spanish filmmakers. Pedro Almodóvar, Alejandro Amenábar, and even Luis Buñuel all vie for contemporary recognition from critics and cinephiles alike, but Franco is part of the criminally ignored Spanish horror and exploitation tradition. Franco is most well-known for his erotic horror films that effortlessly mixed gratuitous nudity, sadism, and surreal horror (as The Guardian puts it); however, La Noche de los Asesinos (aka Night of the Assassins aka Night of the Skull) (1974) lacks many of Franco’s calling cards. There is only a very brief amount of nudity (and even that is in the form of a wet nightgown), the violence is understated, almost to the point of pantomime, and the horrific elements are staunchly in the tradition of the southern Gothic tradition of America.

These are not criticisms of the film, at least not when the gestalt is considered. While the absence of bizarre eroticism and discomforting gore is noticeable, Night of the Assassins manages to overshadow these lacunae by creating a truly surreal atmosphere, greatly aided by the absurdity of Castilian Spanish being spoken in 19th Century Louisiana, complete with aristocratic English names like Archibald. The film focuses on an aristocratic family in Louisiana and a series of ritualistic murders, beginning with the patriarch, and slowly working its way through the extended family and plantation servants. The film’s story is not what it seems, as audiences will find out, and halfway through the film the viewer may ask herself if she has missed something.

The somewhat confusing story—particularly the unexplained elements—is actually one of the weaknesses of the film, although by the end it is generally clear what has transpired. The film’s title sequence purports that the screenplay is based off an Edgar Allan Poe work, but aside from the burial sequence at the beginning of the film, this claim seems to be made solely to boost Night of the Assassins’ cultural capital. 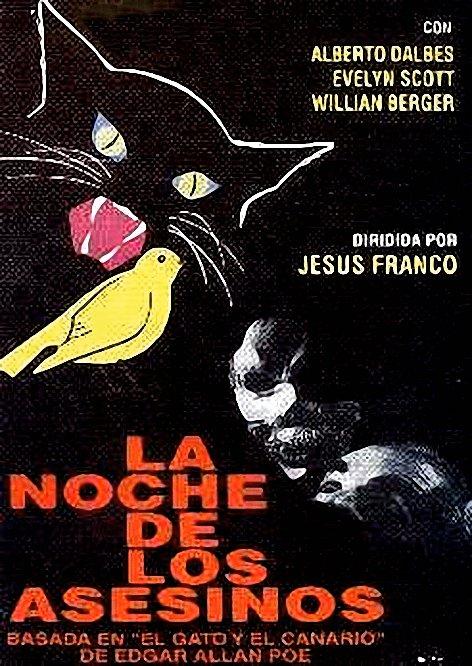 Despite stretching the truth of its literary origins, the film seems quite a bit like a Poe piece. There is an element of superstitious horror that harkens back to a pre-modern America, such as the elements of nature doing the killing with a skull-masked figure aiding in the process. In fact, it is the Gothic atmosphere that is the strongest point of the film, acting as the organizing principle under whose aegis the relative mess that is the story and cinematography operate.

Speaking of the cinematography, for how advanced Franco was in his career, it is a bit disappointing to see how sloppy some of the shots are. The lighting in particular was not up to par; even though this is a horror film, many of the shots are underexposed or lack the proper lighting setup to give the audience an idea of what is happening. There are also many moments where the shot is out of focus, a characteristic that is appropriately muted by the VHS-level transfer for the region 2 version of the film. With that said, Franco and DP Javier Pérez Zofio include plenty of crash zooms that are the calling card of continental European horror and exploitation films of the 60s and 70s and the murder sequences are filmed in a variety of visually interesting ways.

Night of the Assassins is far from a great film. In fact, many viewers may call it a bad film. However, it cannot be called a boring film and for that reason, adventurous viewers should find something to enjoy about the movie and—hopefully—be moved to further explore the oeuvre of Jess Franco.