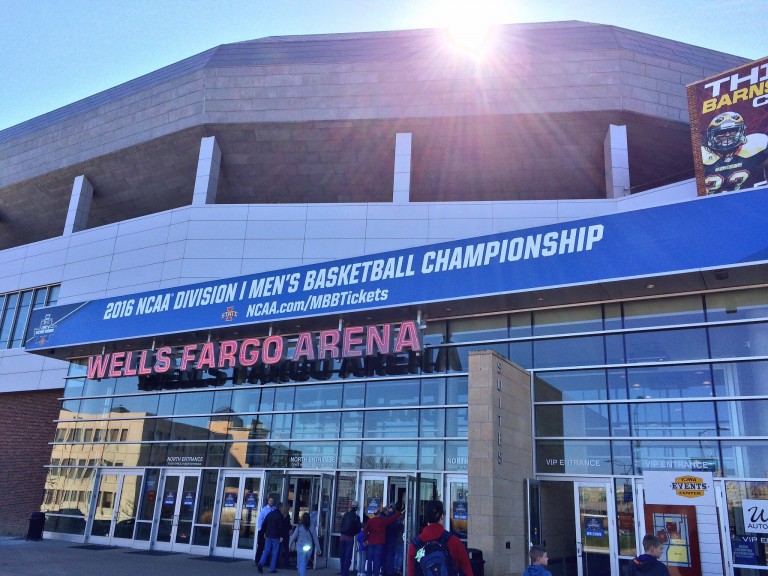 Perry Ellis leads Kansas into second round against UConn

Des Moines, Iowa — Going into the last NCAA tournament of his college career, Kansas senior forward Perry Ellis is determined to get things right. Heading into Kansas’ second round matchup with UConn Ellis is only eight points away from passing Kirk Hinrich and moving up to tenth in all-time scoring at Kansas.

“It’s a drive in my game,” Ellis said of his senior year. “Just knowing this is my last go-round, I’m willing to do whatever it takes to try to win and that’s kind of my mindset.”

During his time at Kansas, Perry Ellis has advanced as far as the sweet sixteen in his freshman year in 2013. However, recently, the team has struggled in the tournament. Kansas lost at this stage in the tournament in both of the last two years.

After his team’s 105-79 win over Austin Peay, Ellis spoke about his team’s poor defensive play. Kansas will have to turn in a better performance Saturday against UConn. With a win over Colorado on Thursday, Connecticut goes into the matchup with some momentum through a slight comeback win over Colorado that highlighted Connecticut’s ability to get out in front of teams in transition.

“Just knowing this is my last go-round, I’m willing to do whatever it takes to try to win and that’s kind of my mindset.”

As a quiet leader of the Jayhawks, Ellis has brought along some young players as well. In Kansas’s win Thursday, 18-year-old sophomore guard Sviatoslav Mykhailiuk set a career high in scoring with 23 points. Another surprise throughout the whole season has been Devonte’ Graham. Graham has averaged 11.4 points and 3.9 assists this season.

“He’s the key to the team,” Graham said of Ellis. “You know, sometimes we forget about him. We always have to play through [Perry] on any given day.”

In Kansas coach Bill Self’s pregame press conference, Self said Ellis’ consistency has been very important to the team but can, at times, make for fundamental, less flashy basketball.

You can hear KJHK’s broadcast of Kansas and UConn on 90.7 FM live from Wells Fargo Arena in Des Moines, Iowa. Dylan Sherwood and Sam Davis will bring you the game along with pregame coverage beginning at 6 p.m. Saturday evening.