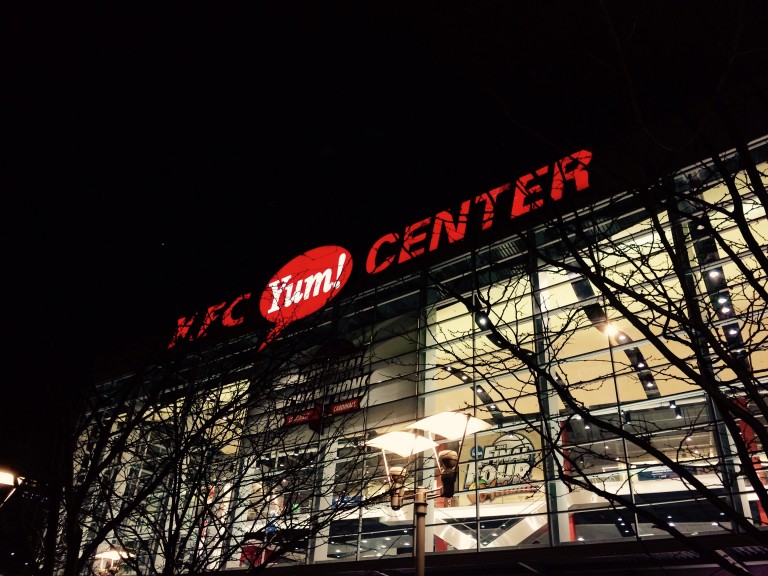 LOUISVILLE, KY. — After dancing through the first and second rounds of the NCAA Tournament in Des Moines, the Kansas Jayhawks were set to play the first of what could be the final four games left in their quest to cut down the nets in Houston and win a national title.

The Jayhawks proved once again that they are worthy of the overall number one seed, cruising to a 79-63 win over the fifth-seeded Maryland Terrapins as senior forwards Perry Ellis and Landen Lucas led the way. “It feels great, we’re just trying to take it game by game, step by step and we just have to come out and work hard, just be focused,” Ellis said.

After the Jayhawks won the tip and came up empty, Maryland senior guard Rasheed Sulaimon threw the first punch of the night as he drained a three pointer that sent the Terrapin faithful into an early frenzy. Sulaimon rode the big pop to 12 first half points and two rebounds.

Both teams experienced poor shooting early, but Kansas senior forward Perry Ellis matched Sulaimon’s effort with 12 first half points and two rebounds of his own. In the process, Ellis made history as he passed former Jayhawk great Paul Pierce to become the eighth leading scorer all-time on Kansas’ career scoring list.

Kansas ran into a scoring drought midway through the first half that reached its peak as junior guard Frank Mason drove inside and put up a shot only to be swatted by Maryland senior forward Jake Layman. In a moment of hesitation by the Terrapins, Kansas junior guard Wayne Selden scooped up the ball and quickly laid it in to bring the game within one.

Kansas continued to confidently drive inside despite Maryland’s presence in the paint — the Terrapins reached their full game block average in the first half alone. On the next Kansas possession, sophomore guard Devonte’ Graham penetrated and, like Mason before him, was blocked, but this time drew a foul. His two made free throws gave Kansas the lead and were the core of an 8-0 Jayhawk run. “When we get in the paint we can create for ourselves or make plays for others, so that’s just what we were trying to do,” Graham said afterwards in the locker room.

Kansas only connected on one of five three point attempts in the first half; Selden got the long ball to fall with only 51 seconds to go in the period. Never-the-less, the Jayhawks came out firing in the second half and the Terrapins matched their effort until the Jayhawks began to pull away in a quick and frenzied 7-0 run. On the night, the Jayhawks only managed to score three shots from long range. “We have a lot of different weapons on this team, and it was Wayne that kind of stepped up in that first half knocking down shots and gave us some momentum,” Ellis said.

Kansas maintained its lead in route to a victory as Ellis scored 20 or more points for the seventh time in eight games and recorded a season high 27 points in addition to his five boards. Landen Lucas was also a major contributor and tallied his third double-double of the season with 14 points and 11 rebounds. “Credit to my team, they give me the ball in good position,” Lucas said, “that’s the way I score, off of those guys.”

Kansas, now 28-0 when leading with five minutes remaining, will look to bring momentum and their 17 game win streak into a contest against the Villanova Wildcats this Saturday at 7:50 p.m. central. “We’re so excited to be advancing and getting an opportunity to play for the right to go to the Final Four against a terrific, great Villanova team,” Kansas coach Bill Self said.

You can listen to live play-by-play coverage of Kansas and Villanova in the NCAA Tournament on 90.7 FM in Lawrence, Topeka and parts of Kansas City. Follow the team on Twitter, @KJHKsports, and online for all-day coverage of the team in Louisville.