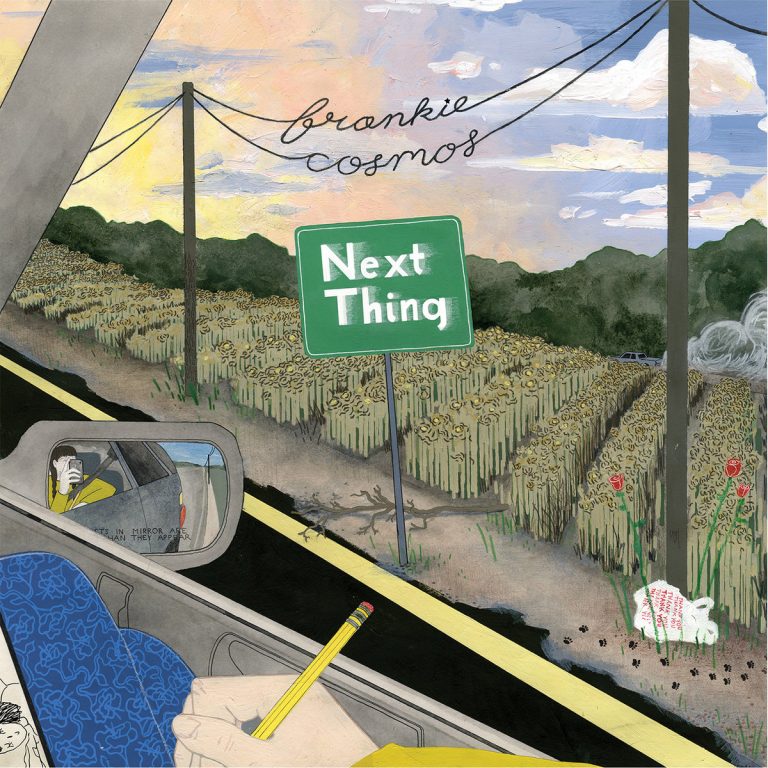 Frankie Cosmos’ Next Thing is our most spun new record this week! Greta Kline released this LP, her second full length as Frankie Cosmos, on April 1st to waves of love and excitement. Flowing in the same precious, DIY lo-fi vein as earlier releases Fit Me In and Zentropy, it’s another collection of tracks that dote on the importance of small moments. Kline amps up from the electronic sounds of Fit Me In, brings the bass out a bit and combining it with a louder fleshed out sound from the guitar and drums. It’s still soft though, a thin cotton dress that rests on your skin so gently even when the kit is thumping and Kline is feeling sinister or truly perplexed by love.

Following up Next Thing is A Mineral Love, the eighth LP from Bibio, project of UK producer Stephen Wilkinson. This experimental electronic release is an amalgamation of Wilkinson’s beautiful discography. It’s soulful, disco tinged, folktronic, and groovy as hell. Number three on our chart this week is Parquet Courts’ with Human Performance. Digging into Parquet Courts roots, KJHK Music Staff writer Ben Hitz says, “For anyone who has ever felt like a consumer slave, questioned the existence of free will, or wondered if we are all just the sum of the media we consume: Parquet Courts is the band

for you. Their songs are like a slow, soaking rain during a prolonged drought, quenching the thirst for something real, something smart, something wholesome in a desert of superficiality and vapidity.”

Number four on our chart this week is The Story of Fred Short, Marco Benevento’s sixth solo LP, released on Royal Potato Family Records. Billed as a pianist, Benevento shows his strengths as a narrative builder and composer on The Story of Fred Short. The release sifts through disco and funk sounds and imbues them with a raw, psych rock power. A seven piece suite makes up the entirety of the B side and explores the story of Fred Short, a mystery of a man who once inhabited what is now Benevento’s property near Woodstock, New York. Closing out our top five is Black Mountain with IV.  This fourth release from Vancouver progressive psych rockers is described by KJHK Music staff writer Josh Gaston as “a seemingly disparate amalgam of rock music over the last 50 years: late ’60s psychedelic rock, ’70s progressive rock and AOR, ’80s new wave, ’80s post-punk, ’90s and ’00s stoner rock, etc. One can hear intimations of Led Zeppelin, Pink Floyd, David Bowie, and Yes, among many others.”

New to the chart this week: Cullen Omori with New Misery, Esperanza Spalding with Emily’s D+ Evolution, Mike Dillon with Functioning Broke, and Fela Ransome Kuti and His Koola Lobitos with Highlife-Jazz And Afro-Soul (1963-1969).