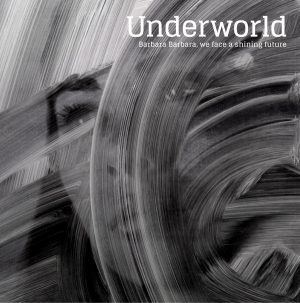 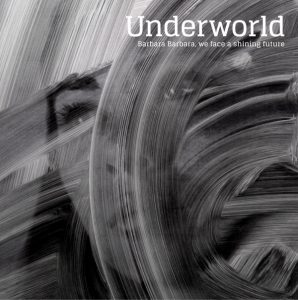 To most American audiences, Underworld, the duo of vocalist Karl Hyde and producer Rick Smith, will be best remembered for providing the excellent ending music to the cult film, Trainspotting. While that tune, titled “Born Slippy.Nuxx,” has gone down in history as a timeless rave anthem, electronic fans old and new across the pond know Underworld better for its influence on electronic music, via a superb live act and a series of excellent techno albums in the 1990s.

The pair’s latest, Barbara Barbara, we face a shining future, is a showcase of that side of the band’s legacy. The result is not a glowing highlight amon electronic albums this year, but is their best release in the past 15 years.

Barbara Barbara flourishes because the band isn’t afraid to embrace its signature sound. It’s an album that one might expect to hear at a club setting, but it’s also clearly meant to be heard in the comfort of the home. “If Rah” comes off immediately as a track that should be thumped on a sound system, due to the hypnosis its rhythm and hooks induce on the listener.

Meanwhile, “Nylon Strung” could serve as a poignant jam to end a rave at 3 a.m. On the other side, “Santiago Cuatro” serves as a great break midway through the album, as it substitutes out a pulsing beat in favor of Spanish-style string plucking. Karyl Hyde’s vocals throughout are top notch, whether it’s through eliciting a trance by chanting “Luna luna luna lun-a” or using his words to convey emotional highs and lows throughout each track.

This is all par for the course with Underworld, and anyone fond of Dubnobasswithmyheadman or Second Toughest In The Infants will be pleased. The album feels right in the moment and the high quality, earnest songwriting heard here doesn’t age.

Recommended If You Like: Orbital, Leftfield, Moby, Chemical Brothers