Hospital Ships: The Past Is Not a Flood 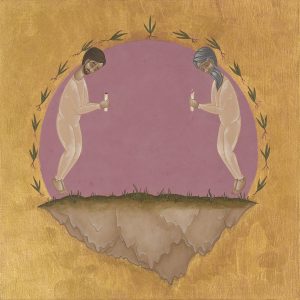 There is a level of delicacy and intention with emotion, the twinge of raw nerves, that when translated into a piece of music leaves you feeling excavated and simultaneously welled over with feeling. Jordan Geiger, the human behind Hospital Ships, has reached this level on The Past Is Not a Flood. The six-track LP is on the Savannah-based Graveface Records alongside acclaimed label mates Black Moth Super Rainbow and The Appleseed Cast, among others.

Currently residing in North Carolina, Geiger created this album after relocating from Lawrence to Austin where he worked closely with Swans percussionist Thor Harris to craft new music with trust, patience, and experimentation. He talks openly of the journey the album is translating; songs explore mental illness, grieving and “accepting the painful and temporary nature of life,” says Geiger. You can feel the fleeting nature of life almost too well in “All In Time” when he chants “We’re all going to die” over and over amidst plodding percussion and heavy piano melodies.

Over the past 15 years, Geiger has toured and released music with various groups including Shearwater, Des Ark, and Lawrence group Minus Story, with Hospital Ships rooted in the Lawrence musical community. The three Hospital Ships releases prior to The Past Is Not a Flood are KJHK favorites, experimental yet soothing indie folk that is spun often on our weekday local block sets. This fourth release can be categorized similarly, with the precursor that it is simply stranger.

The LP’s credits are varied and peculiar, containing contributions from seven folks outside of Geiger. Geiger is credited with many different instruments: “whistling, [a] LaCreuset dutch oven, Thor’s vibraphone, weird string thing Thor made for me….” Multiple musicians are credited for playing dulcimer; Jonas Bonnetta is credited for “back ground vocals, [and] other weirdness….” In addition to the varied instrumentation, Geiger sources samples from past Hospital Ships tracks and features selections from “God Made Me” by Shearwater in “Long May You.”

The chaos of the credits adeptly translate the chaos of the songs. Each is its own miniature masterpiece of sounds. Geiger’s beautiful and delicate falsetto, constantly evolving percussion from drums synthesized and not, frequently remorse piano melodies and the aforementioned experimental instrumentation are stacked on top of each other in a cairn graveyard of sound. Save the bass heavy synth beats of “All In Time,” each track unfolds delicately with chimes and/or piano. From there they each fractal into different beasts; “You and I” is creepy and spacey, percussion lurking in the back of the sound; “Long May You” is gentle, with supple looped strings, affirming melodies, and lyrics that look forward instead of into the void; “All In Time” is deeper and heavier than any other track and intensely centered on our fleeting mortality.

The fate of Hospital Ships is determined in the credits of The Past Is Not a Flood, which begins by saying “Hospital Ships was….” This seems to be Geiger’s way of ending the sentient and tender journey of Hospital Ships, one marked by emotional intimacy and stunningly handsome instrumentals.

Recommended If You Like: The Antlers, Wye Oak, Cotton Jones, BC Camplight, Angel Olsen