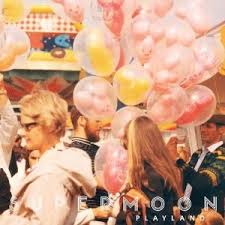 Supermoon’s recent full length release, Playland, gives fans of the beachy post whatever sound something new to enjoy. While at its core it is very much surf coated indie pop with its jangly guitars and sliding hooks, the vocals and progressions add an unique twist. Not only do they bring a new approach to a popular genre, they keep listeners on their toes by switching up the sound from song to song while still keeping a desired flow.

The album starts with a moody melody and vocals similar to Love Inks. It switches up on the next track by upping the tempo and adding a lighter sound. The next few tracks keep up with the surf-pop but with stronger lyrical content. Things really start to change on the next track, “Unsaid,” which is so perfectly twee. It’s a quick track but is near and dear because who doesn’t love twee pop? The last two tracks feature more jamming and experimentation. The last one, “Fast Fashion,” is slightly reminiscent of Evol era Sonic Youth.

Playland is the second release from Supermoon and, after listening to its entirety, I hope there will be many more releases to come.

Recommended If You Like: Love Inks, twee pop, Beach Fossils, Widowspeak, Sonic Youth
Recommended Tracks: 6 (Unsaid), 2 (Witching Hour), 1 (Night Division), and 3 (If You Say So)
Do Not Play: FCC Clean
Written by Rachel Bennett on 06/14/2016