Tegan and Sara: Love You to Death 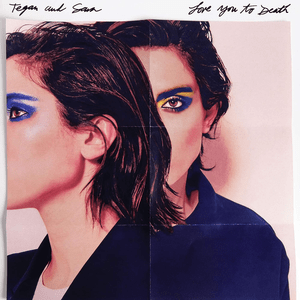 On Love You to Death, Tegan and Sara continue the electro-pop foundation laid out by their critically acclaimed 2013 album Heartthrob. Heartthrob came as a shock to many of Tegan and Sara’s longtime fans who had grown accustomed to their usual indie rock leaning fare–like their breakout single “Walking With a Ghost”–but most embraced the change as evidenced by the exponential growth of their fan base.

The highlight of the album is the lead single “Boyfriend” which proves that they haven’t lost their songwriting edge despite their more pop direction. Other highlights include “BWU” which includes one of their most memorable choruses from a group that is known for their pop hooks, and the instantly infectious song “U-Turn.”

For those expecting a return to the guitar driven sounds of their earlier records, you may be disappointed. With Love You to Death, Tegan and Sara have proven that their new found pop direction is not a one-off fluke. For most artists of their stature, a move like this could have been career killing, but we’ve seen time and time again that Tegan and Sara are able to pull it off.