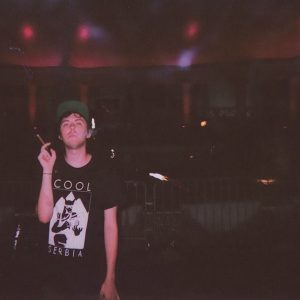 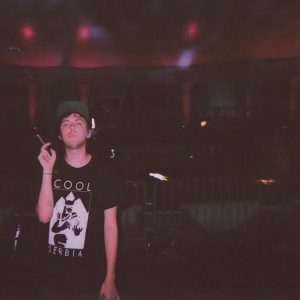 Mathew Lee Cothran and Delany Mills hide delicate, permeable lo-fi indie rock and small moments of relief behind the moniker Elvis Depressedly. Just as in past releases from this Asheville, N.C.-based group, a hazy crackle lays thick over every sound of the double EP Holo Pleasures / California Dreamin’. This shrouded sound is easy to hide inside, easy to wrap up with melancholy, but Cothran and Mills create a bright sound despite the style and content.

Holo Pleasures, released in early 2013, makes up the first half of the 12 track release, and June 2016 release California Dreamin’ the second. The tracks come from the same session despite the three-year gap in release dates. It may seem nonsensical, but once you listen through you may realize there is a distinction in the companion EPs. Cothran and Mills have said the California Dreamin’  EP bridges a gap between Holo Pleasures and the groups recent LP New Alhambra. The 2015 release leans towards folk-influenced sounds and a gentle mix of Elvis Depressedly’s lo-fi rock sound with dialed down haze on the synthesizers and vocodors. California Dreamin’ continues this killer sunny groove, yet still fits right in with the entire session recording.

Despite its patchwork creation story, Holo Pleasures / California Dreamin’ settles in perfectly alongside the group’s discography. Cothran sings shamelessly of drug problems, just as he does of the tunnel vision of love oppressive structural violence, with an intimacy that is only warmed by the crispy sound of Elvis Depressedly.