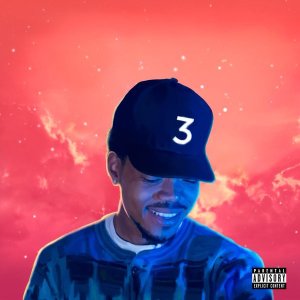 Chance the Rapper, aka Chancelor Bennett, has released his third mixtape. From Chicago, Ill., he is young and has been heavily regarded as an up-and-comer in the rap business for some time now. “Coloring Book” is his gaudiest and most cleanly produced release, and although it lacks the flow and drive of “Acid Rap,” it is well worth a listen.

There is a heavy overtone of gospel throughout the album. These overt religious themes are prevalent both musically and lyrically – particularly in tracks like 1(“All We Got”), 5(“Blessings”), 8(“Angels”), and 11(“How Great”). While often full-length gospel samples are included many of these songs, it is often hard to pinpoint the purpose of their placement. It could be just Bennett expressing his religious devotion, but it could also very likely be the inclusion of important influences from growing up. The latter is further supported by the album’s name itself – “Coloring Book.”

“Coloring Book” includes a number of tracks like 3(“Summer Friends”) that mesh tones of nostalgia into its lyrics. So while there are tracks that exist for nothing more deliberate than how they sound – songs like 9(“Juke Jam”) or 12(“Smoke Break”) – there is an overall theme of reflection.

This album is incredibly well produced and features everybody from Kanye West to Lil Yachty to 2 Chainz to Justin Bieber to Young Thug. There is, however, an inescapable feeling that the mixtape just does not flow well from song to song. The pacing is slightly off, although this is made up by its incredibly clean and smooth production.

“Acid Rap” is a hard mixtape to follow. There was an incredible amount of hype surrounding this release – and for good reason. This album is successful in plainly and successfully stating its business. Although it doesn’t flow well, the tracks on this album are still incredibly solid and deserving of the listeners attention. Fans will love the album.