The Philistines: The Backbone of Night 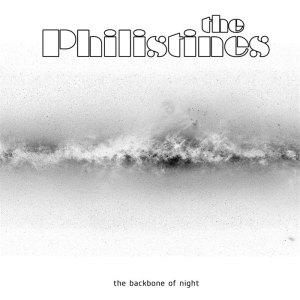 Released on The Record Machine three years after the band got its start, The Backbone of Night is nine tracks from Kansas City psychedelic rock band, The Philistines, who could contend for the premier local release of the summer.

Recorded and mastered at Massive Sound and shared throughout the spring in live settings, the studio prowess of Kimmie Queen on vocals, Cody Wyoming and vocals and guitar, Michelle Bacon on vocals and bass, Steve Gardels on drums, Rod Peal on guitar, and Josh Mobley on keys can now be savored.

On the bills of both Middle of the Map Festival and Lawrence’s Field Day Festival, the six-piece group also played South By Southwest in the spring of 2015 where they rubbed shoulders with Bill Murray, a fan of the band catching a set at Maria’s Taco Xpress.

Lysergic dispositions run rampant on The Backbone of Night with elements of light and dark employed as “1971” bleeds gracefully into “Radiation Drive,” one of the album’s most dynamic tracks. Wyoming and Peal simultaneously rip frets off the neck with defiant licks in an unending battle upholding the adage that competition breeds success.

Layers of tonality surface from collages of guitar, vocals, and keys to provide a stout studio product. Effects reverse the guitar at the beginning and end of “Accretion Disco,” eliciting a percussive and entrancing illusion. A more rhythmic “Arecibo” follows with Bacon leading the way on bass. With a classic feel and new exploration alike, the debut from the seasoned six-piece is a tempting night on the town at your favorite local venue.

Recommended If You Like: Black Rebel Motorcycle Club, The Black Angels, The Conquerors
Recommended Tracks: 1 (Radiation Drive), 2 (The Accretion Disco), 3 (Steep)
Do Not Play: 1971
Written by Harrison Hipp on 07/13/2016