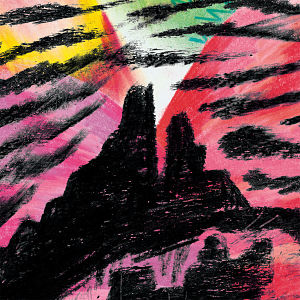 Chrissy & Hawley is a brand new electronic dance duo out of Chicago. This self-titled debut album is out on Chrissy’s own Nite Owl Diner label. Chrissy is Chris Shively, resident DJ at the Smartbar, former home of giants such as Frankie Knuckles, and a former KJHK Music Director and DJ. Hawley Shoffner is a singer-songwriter also from Kansas.

Their cute female vocals plus fun dance-able beats combo is reminiscent of the early 2000s electro-pop/electroclash scene, calling to mind similar duos like ADULT. and much of the DFA label output. However Chrissy’s penchant for vintage beats, both of the dark and cold variety, as well as warm and shimmering, give this album a greater variety of sounds than the electro trend achieved. Giorgio Moroder-esque italodisco beats can be detected on such tracks as “Love Again” and “The Woods”, while darker beats à la Depeche Mode or New Order can be found in “Photobooth” and “Personal Touch”.

The vocals are cute, simple and at times sarcastic. “Photobooth’s” mocking chorus “Take a picture, it’ll last longer” sounds like a great anthem to holler back at street harassers or dudes proffering unwanted attention at the bar. DNP track “Together” isn’t about happy coupledom, but instead Hawley imploring someone to “get your sh*t together,” another example of the at times sassy and unexpected lyrical subject matter.

The mid-tempo beats and low-key vocals make for versatile record great for home listening or for getting down at a dance party. I would sum up the record’s sound as “Midwestern Ladytron”.