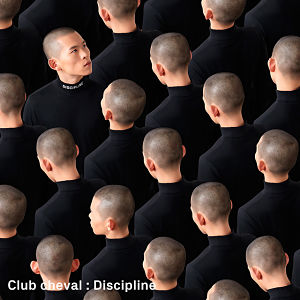 Club Cheval (pronounced “shuh-vall”, french for “horse”) is a group of four electronic musicians from France. Discipline is their debut album, though they’ve been releasing singles and EPs since 2012. They blend r&b sensibilities with mid-tempo house beats, and invite a range of vocalists to perform on their tracks. Tracks 9 (Legends) and 14 (Discipline) are anthemic and joyful. Other tracks, such as 5 (Nothing Can Stop Us Now), 11 (Other Guy) and 12 (Scream), turn to traditional r&b lyrical fare about the male singer’s sexual prowess. I enjoyed these less as the boasts feel forced and trite. Tracks 2 (Young Rich and Radical) and 3 (From the Basement to the Roof) are preferable, showcasing better lyrical writing and more interesting beats.

If you liked recent r&b/house bands that have been on KJHK recently, such as Junior Boys, Rüfüs du Sol and Marco Benevento, then this will be right up your alley. Discipline may have even more play-ability than any of the above-mentioned bands latest releases.

Recommended If You Like: Disclosure, Junior Boys, The Weeknd, Chet Faker
Recommended Tracks: 14 (Discipline), 9 (Legends), 2 (Young Rich and Radical), 3 (From the Basement to the Roof)
Do Not Play: none
Written by The Czech on 08/09/2016