Owen: The King of Whys 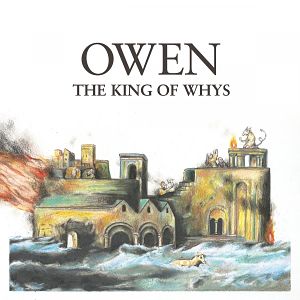 Cap’n Jazz was the band that eventually spawned late 90s/early 00s Chicago emo acts like Joan of Arc, Promise Ring, American Football, Owls, Ghosts and Vodka, and last but not least, Owen. While each one of those bands had its own unique style, Owen’s was by far the most melodramatic, heart-on-sleeve, and sincere (read: devoid of irony and self-consciousness).

Owen is the solo project of Cap’n Jazz drummer Mike Kinsella. Owen started as a sort of more spacious, meandering version of his band American Football while also being more heavily reliant on acoustic guitars.

King of Whys is Kinsella’s 8th full length as Owen. The new album finds Kinsella working with Bon Iver collaborator S. Carey, as well as a cast of outside backing musicians for the first time. Besides being Owen’s best-sounding album to date, it has some of Kinsella’s strongest and most concise songs. Additionally, whereas some of Owen’s past work can get bogged down in too much experimentation and too many layers, here they are whittled down to only what is necessary.

Lyrically, Kinsella explores a lot of issues regarding what it means to be a family man: arguments, sleep-deprived nights, and finances amongst them. For example, in “The Desperate Act” Kinsella seems to be having a one-sided conversation with his wife. He talks of the difficulty of having “two lives”: one as a musician and one as a family man as the listener might infer. The “man” is disappearing and the “musician” needs attention like a child.

Emo has a bad name in today’s music climate, which is unfortunate, because instead of sincerity and emotional honesty, we’re under a constant barrage of layers of irony and crippling self-consciousness.

Luckily, we have Owen carrying the heart-on-sleeve torch.