You Are What You Eat spotlight: Vegans

Health advocates always say to “eat the rainbow.” This is just a simple reminder to incorporate lots of different foods into our diet so we can get all the necessary nutrients to function optimally. But nowadays, with a rainbow of different diets and eating styles, it seems the emphasis is on restriction – but sometimes for good reason.

Veganism is a diet (and lifestyle) that restricts the consumption of all animal products. Not to be confused with vegetarianism which only eliminates meat, veganism eliminates meat, eggs, dairy products and honey. But what’s the motivation behind going vegan? This choice can be rooted in health, environmental or ethical concerns, but usually comes back to the main idea that humans should not exploit the lives and labor of animals.

A vegan diet can be healthier than a diet that incorporates animal products. It also takes away money from industries that abuse animals and does not at all benefit the animal agriculture business that contributes most to global warming. The benefits of eating a vegan diet are clear, but it’s easier said than done. A lot of work goes into any sort of restrictive diet, and as college students, many of us don’t have time to factor in meal planning or preparation. 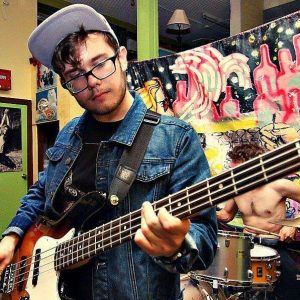 John McCain is a KU student, Lawrence native and one of our own here at KJHK. He has also been eating vegan for the past two years. John says he sometimes struggles with the balance between his busy college student schedule and keeping his diet well-planned, but remedies this by sticking to the easy, nutrient-packed basics: brown rice, sweet potatoes, black beans and other staples. But sometimes when it’s lunchtime and you’re too starved to actually prepare food or during a 2 AM night out on the town, it’s easier just to eat out. It’s a good thing Lawrence has a variety of great restaurants with vegan options.

“As far as fast food goes, the two best places for me are Burrito King and Yello Sub. I personally like both of them a lot. Lots of places downtown have vegan-friendly options! People are starting to get the hint that everyone wants their veggie burgers, so Burger Stand is great. You can also find vegan options at any kind of Mediterranean or Indian or Asian restaurant,” John told me.

Despite the many differences in tastes, appetites and diets across the world, food is something that can bring people together. For vegans, it can bring people and animals together, even right here in Lawrence.

For more information on the vegan diet, recommended resources include Vegan.org, the Vegan Starter Kit and the documentary Cowspiracy.