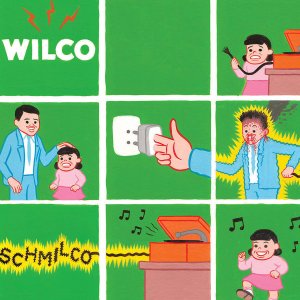 Ten records in, the phrase “a new Wilco album” means a lot of things for the band’s diverse fan base. Since the eclectic masterpiece of 2002’s Yankee Hotel Foxtrot, many fans have been left waiting for a return to the explosive, meticulously experimental sound the band created on an album that routinely tops out as one of the best of the decade. Instead, they took off into their own direction with a slew of solid-yet-safe records, leaving many to criticize the group for apparently refusing to be adventurous. The latest offering, Schmilco is the band’s broadest effort in recent memory, with enough range to please nearly all types of Wilco fans.

The album opens with the wistful “Normal American Kids,” a folksy, reflective piece reminiscing about the naivety of youth. This is an incredibly personal track by front man Jeff Tweedy, a stark contrast to the usual lineup of abstract, generalized messages heard on last year’s Star Wars. Lines like “All the time holding a grudge/before I knew people could die just because” give insight into the pain of a learned maturity, with an intimate glimpse into the thoughts a man has on his own childhood. The raw honesty of the track is followed with the breathy “If I Ever Was a Child,” a folk-fest jam that feels like a stripped back B-side from the band’s 2007 album, Sky Blue Sky. The production of the album especially shines as the warmth of acoustic tones come through in full color, a feat that obviously demonstrates the experience the veteran band has under their belt after nearly twenty years in studio.

The acoustic-centric vibe that initially surrounds the album is bucked with frantic, throat-clenching rhythms found on “Cry All Day,” or the creepily refreshing “Common Sense.” After repeatedly being written off as a band only capable of “dad-rock,” Wilco comes through with an impressive amount of attitude on this track. Moody, plucky guitar strings give the song a swampy, gothic haunted house vibe as the structure continually falls apart and pulls itself back together. The following “Nope” offers little surprises as a dull, white bread piece likely to get lost among the band’s vast discography.

“Someone to Lose” pulls in bouncy pop elements with wobbly guitar licks from guitarist Nels Cline, and is immediately followed with the ironically melancholic track “Happiness,” in which Tweedy muses over the death of his mother. “Quarters” offers finger-picked folk moods paired with a soft recollection of working at his grandfather’s bar, all before the song falls out from underneath and escapes into a washed out, steel pedal sunset. “Locater” juxtaposes itself with a brutal, rotating drum beat, followed by the psyched out, spacey “Shrug and Destroy” that nurtures late-night, subdued rock tones. “We Aren’t the World (Safety Girl)” features a mature lesson in learning the scope of our own reach as human beings with the realization of having to inevitably pass the torch onto a younger generation. The album closes with “Just Say Goodbye,” a non-descript strum-y grey piece that leaves an otherwise colorfully produced album with an inconclusive end.

While no track lacks an acoustic guitar, this album is by no means a stripped back effort by the band. At a total playtime of 36:22, Wilco shows up to blow minds with a laser-like focus on brevity. Key experimental elements of the album will be sure to bring back fans of years past, something that last year’s Star Wars disappointingly lacked. All around, this is a much more expansive effort than the last record and feels much more like a polished, earnest offering. The album feels like some of these tracks have been in the works for a while, and the tapestry-like production shines and shows off a maturity that only experience provides. This group is old with over two decades under the band’s collective belt, which translates into these guys knowing exactly what they want out of an album. Schmilco does it all well. Every element feels controlled, as if the music is made with an end in mind before consideration of a beginning. At this point, there is no telling what direction the band heads to next, but Schmilco gives both the fans and the band a solid place to stop and reflect.

Recommended If You Like: My Morning Jacket, Kurt Vile, William Tyler, Steve Gunn, Dawes, The Jayhawks
Recommended Tracks: 1 (Someone to Lose), 2 (Common Sense), 3 (Normal American Kids)
Do Not Play: None
Written by Alex Murray on 09/07/2016