Saturday September 17th, SUA put on the rescheduled Campus Carnival that was originally scheduled during  Hawk Week in the parking lot of the Lied Center.

Marcea Say, SUA’s carnival coordinator, said the purpose of putting on the carnival during the Hawk Week is to introduce freshmen to student organizations and getting students involved on campus by making some new friends. She also said the event targets international students to expose them to American culture and campus life.

However, the unpredictability of Kansas’s weather forced them to make a decision. Marcea said they had to decide two days before the carnival whether to reschedule the carnival and keep the original plan.

“That week, there happ 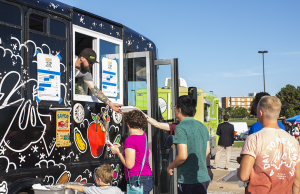 ened to be a lot of serious thunder storms going on,” Say said. “We called every single weather service that we could… kind of got their input … but it was really hard to tell. We decided that ultimately someone getting struck by the lightning wasn’t really a good idea, so we postponed it.”

In addition to a relationship with the general student body, Say also stressed the importance of having a connection with student groups.

“As a student organization that does get allocated student fees, I think it’s kind of our goal to get them involved and get them into what we are doing, so that way we can impact and get to as many students on campus as possible”

By sending mass emails and talking to all the student organizations, SUA managed to keep all the elements originally planned at the rescheduled carnival.

Jack Weiner from the fraternity Alpha Tau Omega was at the carnival to promote their philanthropy event for the Children’s Miracle Network Hospital.

“Most people are here just for the free stuff and a little bit less about the information, so it’s not incredibly busy,” Weiner said.

Arron Trent and Kara Wiebe from the student ministry the Navigator. Kara said they did not have a booth until the reschedule of the carnival. She said they were lucky to have a booth for a trial. However, they expected more people showing up.

“It’s a little different be in later in September rather than right at the beginning of the year,” Trent said.

Kara said, “I feel like last year there were probably more people here,” saying that she thought having the carnival later in the semester might draw more people because new students would be settled down, but the reality did not meet the expectation.

Although the number of people showing up was low, some students 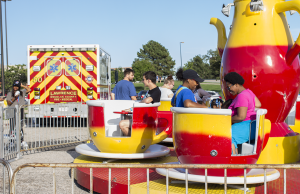 did benefit from attending the carnival. Freshman Grant Johnson said he had a good time coming out and hanging out with his friends as well as learning about Alternative Breaks from tabling.

Paige Madson, a senior in high school, said she got a sneak peek of college life by coming out with her college friends.

“It’s really fun to see the campus life and what college is like before I have to go out there,” Madson said.

The rescheduling added an unexpected twist to the carnival this year having to hustle to reorganize. But Say stays optimistic saying even though nobody knew what the project would end up like, she loves seeing how the carnival put smiles on people’s faces, and that’s the most important outcome of the entire event.

“There are going to be people who leave that event and just had a good time, and we did that,” Say said. “We impacted their day… and create a memory for someone. It’s just incredible.”