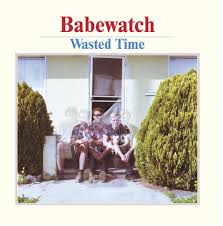 Encompassing the the defining characteristics of garage sound, Babewatch does a perfect mashup of alternative/indie and west coast vibes.
Originating in Oakland, California, Babewatch is a new upcoming band with a lot to offer. They create a blend of sounds from, guitarists/singers Peter Kegler and Callum Beals, bassist Chase Eiseman, and drummer Eli Lyons. Babewatch is filled with character, often classifying themselves and their new album, Wasted Time, as “dad rock”. However, their sound might be better defined as alternative, indie, psychedelic, and jangle pop. All their songs consist of strong chords and distorted vocals; which sometimes corresponds to more of a “spooky psych rock” vibe.
The band states that they still retain the surf tinged sound of their early days, their newer sound has become more influenced by the garage and post-punk sounds. As a result of this new grasp on garage sound their album has a mix of something you could hear from the newer Black Keys or Cage the Elephant albums, or even something as chill as the Beach Fossils or Mac DeMarco. This gives their album a range of diversity that could appeal to most listeners.