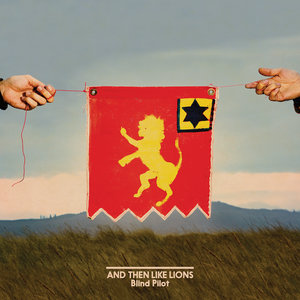 There is a lot to like about this album. The third from established Portland band Blind Pilot doesn’t quite have it all, but it’s got a lot. It’s got uplifting tracks, it’s got slightly dark moments, it’s got a variety of instrumentation. Most importantly, it has obviously meaningful lyrics beautifully and passionately delivered by Israel Nebeker. Regardless of the musical merit of any of the tracks, the vocals are sure to be of quality. That said, most of the album has plenty of musical merit, featuring a full acoustic sound the majority of the time, but knowing when to tone it down and keep it simple. A highlight moment comes at the start of “What Is Yet,” which features plenty of strings until they take a break and Nebeker comes in with just his voice and guitar. Lest we give Nebeker too much credit, notice the support of Kati Claborn’s backing vocals on most tracks.

Blind Pilot doesn’t seem to be trying to be anything it’s not, which is always a good sign, especially when it results in quality like this. The album is genuine and cohesive (it is both written and produced by Nebeker). It has the capacity to make the listener sing along and a minute later give him chills.