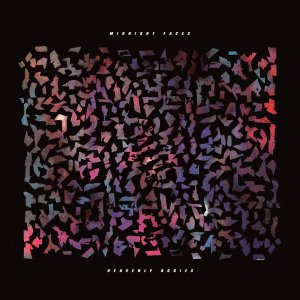 This dynamic trio from LA has created a whole new variety of dream pop with a quicker pulse. The quality of their sound is cinematic. Any one of the songs on this new album, Heavenly Bodies, could be the soundtrack to a film in which the main character speeds down a highway late at night with the windows open and the blinking lights of passing towns serving as a backdrop. This is music that will take you places.

Guitarist/bassist Matthew Doty once played alongside Josh Tillman (aka Father John Misty) in the band Saxon Shore before forming Midnight Faces. This influence has undoubtedly contributed to the quality of the band’s lyricism. The music itself is catchy 80’s dream pop layered in synths and addicting vocals. However, the indie act is hard to describe; a great achievement, of course, in a climate of pop drivel.

These days it’s getting harder and harder to stand out in the psychedelic pop world. Fortunately for Midnight Faces, they’ve managed to develop a sound that is distinct and separates them from other psych pop bands.