The Cycle of Life: A Scientific, Spiritual and Uncomfortable Experience

The Cycle of Life by Body Worlds retired from its debut at the Union Station in Kansas City, Missouri where it was open from May 21st to October 23rd.

According to Union Station’s press release, the Cycle of Life presents the body as it grows, changes, matures and wanes, and every stage of development is documented from conception thru optimal adult health and athleticism to eventual decline.

The chief marketing officer Michael Tritt said the unique part of the exhibition is that all the specimens are real humans that are permanent preserved by a process called plastination. 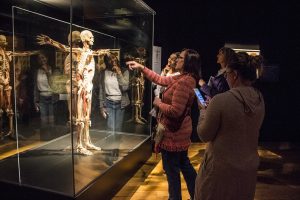 “As far as a presentation of an authentic human specimen, there’s nothing else that even comes close to it,” Tritt said.

Tritt said the purpose of the exhibition is to give one the appreciation of that period that we call optimal health. The exhibition gives guests the information to urge them to extend their optimal health as long as possible. He said it is all about choice.

“You’re living, and you’re living inside of yourself,” Tritt said. “Rarely do you get the chance to step outside yourself, which is what this exhibit does, and see first-hand what that choice did.”

Late nights, alcohol use, unhealthy diets are all a part of college life. Tritt said our bodies are resilient but also fragile, and he said college experience can be a burden to the bodies. However, college students can independently make the choice of being healthy or not. 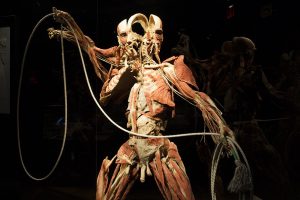 going to do tomorrow to take better care of myself’ rather than ‘what have I already done’,” Tritt said. “It’s the perfect time to be exposed to something like this.”

There is a strong sense of respect in the air. People kneel down, get close and look carefully while discuss with their companions in a rather quiet environment. In the crowd, Ashlyn Smith and Kristin Wilson were holding their worksheets and filling in the answers. They said they are nursing students from North Central Missouri College, which is two hours away from Kansas City.

Smith said the worksheets they were working on counts toward a lab, and they were currently learning about head-to-toe assessment. She said being able to see everything visually greatly helps with understanding.

“I think it’s really cool to see where all of the body parts specifically are without the skin covering everything,” Smith said.

Wilson said it’s nice to know what the body systems do when they work together in a different way that she normally does not get a chance to.

“I think it’s pretty awesome and interesting to see how the body works in a more extraordinary way than the textbook would teach you.”

People who are not in the health profession have a different take. Tritt said some take it as an spiritual experience, and for others it is simply eye-opening to understand the human form’s complexity. 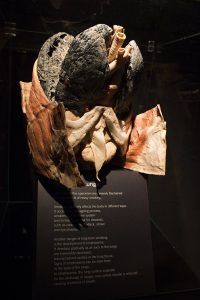 Katie and Luke Oliverius, as kids, experienced the concept of real human specimens for the first time. Rachel Wydeven said they are always curious to learn more, and she did not feel uncomfortable throughout the entire exhibition.

“Just to see the openness, to see each organ and its placement…” Rachel said. “I like the fact that people have given these gifts to share with others.”

However, Katie and Luke were both a little uncomfortable, but thought this is still “cool”. Mary Sue Wydeven, said it is rather spiritual for her.

“I was progressively more uncomfortable, because I felt the soullessness of the bodies I was looking at,” Mary Sue said. “They had once been full of spirit. There was no more spirit… This notion may be more significant to me because I’m 75. I’m more close to the end of my life, closer to the grave than the cradle.”