Rituals of Mine: Devoted 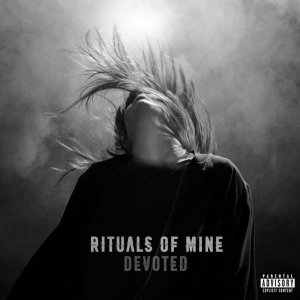 Rituals of Mine may not be a well-known moniker but this duo have been making waves for years. This newest project is an effort renamed from Sister Crayon, which carries the very same soul-fueled and airy trip hop atmosphere as their previous releases. Devoted marks what seems to be an artistic rebirth of sorts, where the group discovered this newest identity as one that more closely relates their life experiences and influences.

The intrigue of this release seems to pivot on its visceral atmosphere coupled with the depth of vocal ranges and styles you might hear on an R&B record. The punch of its heavy beats, traplike melodies and dreampop flourishes are ultimately arresting and consistently interesting. Lyrical content volleys back and forth between intelligent writing to oddly cliched tropes and trending phrases. “Ride or Die” in particular strikes the listener as off-measure in comparison to some of the more intense vocal explications extant throughout Devoted.

The album is easily digested throughout, though songs may feel rather truncated. Its weaknesses lie in areas where the slow build of its ethereal and haunting production feel forcibly stopped and thusly become unallowed to develop. These tracks could ultimately stretch across 5-7 minutes if the vocal arrangements were more spaced out and the underlying canvas allowed to expand and even repeat upon itself.

Criticisms aside, the release is quite strong and anyone who considers themselves a connoisseur of the trip hop genre are probably already listening to this or should at least give it a chance. At its most adventurous, the album digs into some clear witchhouse influences and even has moments that might make their forebearers in Massive Attack and Portishead proud of the genre they helped to pioneer. Hopefully Rituals of Mine will continue to hone their craft and deliver their brand of entrancing musical reverie.