Off the Mic: Kyle Wernimont 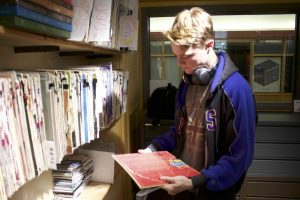 Jacob McCabe: What made you want to join KJHK?
Kyle Wernimont: I think I’ve always loved radio since I was a little kid. I always had the radio on every night before I would go to sleep. And then when I moved here, I was going through the radio dials and KJ really caught my attention because I lived right at the edge of where KJHK broadcasted, and every once in a while I would get a cut of a Jimi Hendrix song or something like that…and once I realized it was a student organization, I became top priority after I decided to come to KU.

JM: Describe your first day in the studio.
KW: Wow. My first day? My first shift, I was almost late. I woke up at 8:30 and was like, “They told me to be here at 8:45! I’m never going to make it!” I ended up getting there at the last second. I’d almost over-prepped for it – I had a list of all the songs I wanted to use that I knew were on the program. My mic breaks were a bit shaky, but it ended up being what I would say is one of my best programs so far.

JM: Do you consider yourself more introverted or extroverted?
KW: Overall, I’ve been more introverted, but since coming to college and working at KJHK, that’s started to change.
JM: Does that contribute to being a DJ at all?
KW: I think it absolutely helps. A trait of being extroverted is that you enjoy talking, which obviously translates well to radio, especially when you’re doing mic breaks. Being extroverted helps to craft a personality that hopefully shows when you’re doing a radio show and makes it more interesting for the listeners.

JM: What impact has KJHK had on your schedule since becoming a DJ? Are you much busier now than before?
KW: From the moment I started, KJHK pretty much began running my life. But in a good way! It’s one of the only extracurriculars that I’m involved with right now, and one of the best parts about many of the positions is that you can contribute as little or as much as you want.

JM: What is your favorite music genre and why?
KW: Well, I don’t really like country…but I do have two exceptions: Willie Nelson and Johnny Cash. Because I can’t choose just one, I’ll say my two favorite genres are classic rock and alternative rock.

JM: Before your session, what is your average preparation process?
KW: My session is in the early in the morning, so it’s kind of tricky because it ties into what I do when I get up. It might sound weird, but what I normally do is run in place for a second to get the anxiety out. Beyond that, mostly I just rehearse what I’m going to say ahead of time.
JM: Do you usually know what songs you’re going to play before your show?
KW: I do not, actually. The interesting thing about being a DJ is we’re generally picking out songs on the fly. You can make it as in-the-moment as possible, or you can plan out your entire shift at the very beginning. It all depends.
JM: What usually determines some of the songs you’re going to play, beyond the theme of the session, like Breakfast for Beat Lovers? 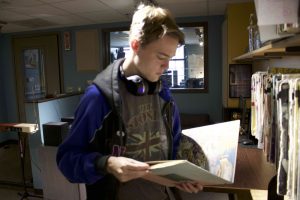 KW: Sometimes it’s entirely random, and sometimes it’s because I simply like the song. Other times, I’ll look out the window and take note of the weather. What feel of music are listeners going to want to hear today? Most people listen to the radio in the car, or walking outside, so that plays an important part in how my show correlates to their mood. That sort of thing.

JM: Who is your inspiration, relating to music or radio?
KW: My inspiration in music is Jack White. Some might call him pretentious, but the man works incredibly hard at what he does, so in addition to liking his music, I aspire to put 110% effort into everything I do.
JM: Is there anyone in radio, or even on the KJHK staff, that you look up to?
KW: Mason Kilpatrick. The man, the myth, the legend.

JM: What overplayed song makes you cringe? Be as controversial as you want.
KW: This is a tough one, but I’ll go with “Sweet Child of Mine” by Guns and Roses. I’m sorry, but that song is extremely overplayed. Every sporting event that song plays at…I cringe.

JM: Just one more question. What do you want the listeners of KJHK to know about you?
KW: I think I would want them to know that I’m very grateful that they listen to such an awesome radio station.