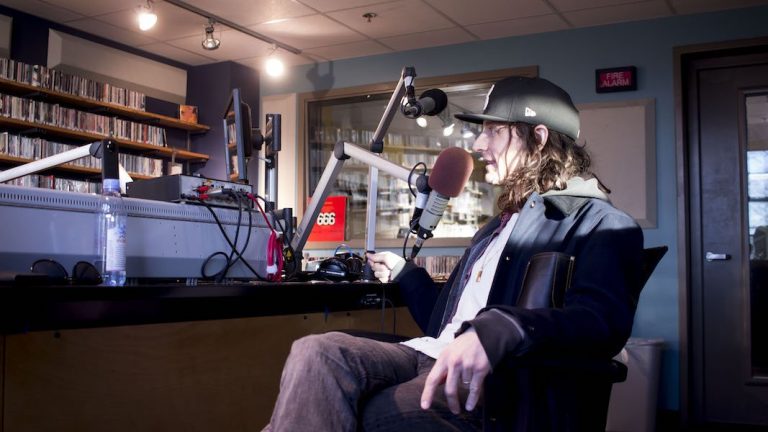 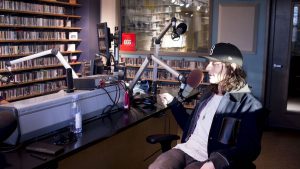 It was a cold Wednesday evening and less than 24 hours after the election when CRX came to Lawrence. Given the 50 people casually sitting around the Bottleneck at 10:30 p.m. on November 9th, you wouldn’t think that a member of one of the world’s most prominent and influential indie-rock groups was about to perform. Once Nick Valensi, guitarist for The Strokes– turned front man for CRX– took the stage, Valensi and his band mates completely melted faces with their high octane rock.

I had the privilege of sitting down with Valensi at the KJHK studio and having a conversation about hitting the road with this new Strokes side project. You can hear full audio of that interview here.

WARNING: some explicit language is used.

It must be a weird thing, taking a step away from your massively popular, festival-headlining band, to load up in a van with new players and new songs, and hit the road to tour tiny clubs around the country. For Nick, this is the most exciting part of the job.

“This project was formed so that I could get out on stage more, and perform these songs live,” said Valensi when I interviewed him over the phone late last week.

Seeing Valensi step onstage is an ethereal and thrilling experience. I’ve traveled to Barcelona to see the Strokes. I’ve been to New York twice just to see the Strokes. I’m used to seeing him shred guitar licks for one of my all-time favorite bands. So to see him walk onto that tiny Bottleneck stage, guitar in hand, it packed just as much impact as ever. I even found myself grinning ear to ear during the show because I was so elated to see him in my tiny town of Lawrence. It was like if you saw Bruce Springsteen at the Underground. 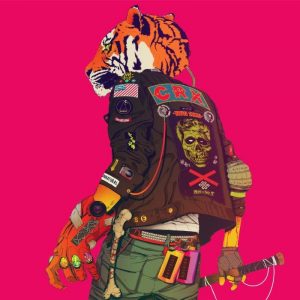 CRX’s music is the kind that anybody can get into. Like the Strokes, it’s just outstandingly catchy and explosive guitar-rock with great bass lines, stellar drumming, and top-notch lyricism. Some songs sound like barreling through the desert going 120 mph on a dune buggy. Some songs sound like your first weekend out on the town in too long and you’re rocking your favorite leather jacket- I call that “feeling yourself” music. Every song, however, sounds like it could be a massive hit on indie-rock radio.

The songs he performed as a member of CRX sounds just like the Strokes. It’s almost uncanny, all of the things I know and love about that band was just as apparent last night. Superb guitar licks, catchy rhythms, and just about as much coolness as you can get. Even when performing to a half-empty dive bar, Valensi is just so damn cool. When he strums the guitar, it’s like effortless for him to produce such a powerful wave of awesome sound.

“Ways to Fake It,” the album’s lead single was like a Pulp Fiction-esque shot of adrenaline to the heart. When the opening riff starts up, it’s like the line for the rollercoaster is over and it’s time to ride with your hands in the air. This song has this electric quality that just sends chills down your spine and urges you to move your feet.

“One Track Mind” features one of Valensi’s finest vocal displays. Hearing this guy sing, you never would’ve guessed that this is his first time singing on a record. His voice sounds phenomenal layered on top of the intricate instrumentation, and the croon that he uses sounds unbelievably natural. Like I said earlier, it’s effortless. He just shows up and does it.

It was bizarre seeing only a couple dozen people show up to see such high caliber rock music, and it’s a little jarring. However, we just ended an incredibly stressful election cycle the day prior, and the times we are living in are jarring to say the least. But there was something special about seeing CRX up on that stage. I didn’t think about anything political for the time they were onstage, and I don’t think anyone else in the crowd was dwelling on anything. We were just enjoying this beautiful gift we call music, something so abundant and accepting of all kinds of people.

They say putting one’s hands up at a concert is the international symbol for not having a care in the world. Now, I don’t know what the future holds, and I’m certainly nervous and hopeful for all of my friends and family across the nation. But last night, when CRX was playing, my hands were up, and it was liberating.