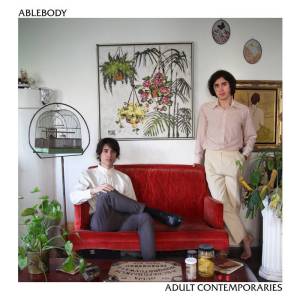 After releasing music independently via Bandcamp over the last several years, the duo known as Ablebody has released their first full-length LP titled, Adult Contemporaries. The album is reminiscent of a vintage 60s/70s style, but fits nicely on a shelf with other bands like Wild Nothing and Fear of Men. Although this is a solid debut release for them, the album is weighed down by several cons. The album starts with a strong, catchy tune called “Backseat Heart” and progresses through the next few songs nicely, but after “Gaucho” I started to become less and less interested with the music. Most of the tracks seemed to be lacking in originality almost like they were spin-offs of stuff that seemed vaguely familiar to me. It was easy listening, but I never felt a strong connection to any of the songs. On a positive note, the tracks transition between themselves nicely, and maintain the same general tone/vibe throughout all eleven tracks. Adult Contemporaries is held up near its end with one solid track called “Say What You Will” which starts with some relaxing synth instrumentation and rolls into a catchy chorus that will put a grin on your face. Overall, Adult Contemporaries is a solid debut release for Ablebody, but is lacking in originality and general allure. Can’t go wrong with playing the first few tracks, but I’d recommend previewing the rest of the album before mixing the songs into your set.