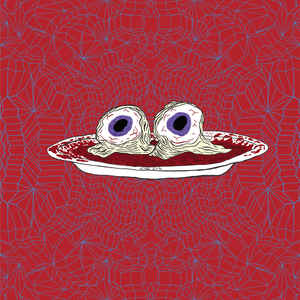 bAd bAd delivers a fairly unique and polished psychedelic/punk/garage rock sound on their eponymous album. It grabs attention from the get-go, opening with guitars oscillating like alarm bells. It holds interest by moving cleverly between direct, driving rock and the kind of dissident, rhythmically off-putting sounds one might hear on an earlier Pink Floyd record. It even incudes some spooky repetitive voice sampling here and there. The album gets even more impressive when it slows itself down. The mid-album interlude, “Hypnagogia,” channels some work of the Zombies and may be some of the album’s best and most transparent composition.
Fortunately, there is a bit of an explanation for the cover art. The band evidently played a lot of spaghetti western-inspired music in their early days. They clearly pay homage to this in “Figure 8,” and elsewhere with that distinctive wailing supporting the main vocals. (However, no explanation could be found for the roasting six-toed foot on the back of the CD case.)
bAd bAd is not exactly a concept album, but its stylish inter-track transitions are not to be overlooked or taken for granted. When the listener doesn’t notice most of them the first time through, the artists probably achieved their goal on that front.
Overall, bAd bAd has produced a solid release, and certainly shows potential to develop an even more unique sound in the future.

Recommended If You Like: Pink Floyd, The Flaming Lips, Radiohead, The Zombies, Green Day, Ennio Morricone
Recommended Tracks: 5 (Hypnagogia), 9 (Figure 8), 3 (Pollen)
Do Not Play: None
Written by Joe Underwood on 11/17/2016