Fermentation: Let Nature Do the Work

Bubbling, sizzling, fermentation is sneakily happening in the back cabinet. People mostly think of fermentation as a process of making yeast and liquor, but fermentation can make your life healthier as a simple way of cooking.

A fermentation class was held by River City Chiropractic on November 4. Doctor Charlie Herman, a chiropractor from River City Chiropractic, said fermentation class is related to gut health, which is closely correlates to health of the neural system that chiropractors typically work with. Gut health, Herman said, is maintained by bacteria, which is necessary for humans’ immune system. 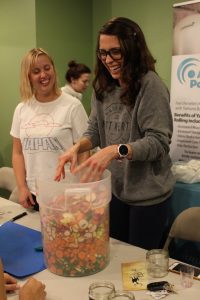 “Because of the amount of antibiotics and chlorinated water and different food that we consume, our flora, which is the different microorganisms that we have in our system, we don’t have a good variety typically,” Herman said.

Fermentation, in this case, allows bacteria to grow, helps predigest food and maintain a good variety of probiotics in our bodies. However, societal beliefs have been biased against bacteria, when actually “being dirty” sometimes can be beneficial. Herman said they started holding free classes like this to educate people on these topics and encourage people to be aware of what they do to their own bodies.

Sarah Salzman and Savannah Noyes from Wild Alive Ferments are the lecturers for the class. Sarah said she loves fermentation because it feels like magic.

“It feels like you start out with one thing and you end up with something else,” Salzman said. “All it takes is salt and time.”

The class started with a lecture about bacteria and gut health. According to New York Times artilce titled “Some of My Best Friends are Germs”, there are 100 trillion bacteria in and on a human body. Humans are only 10% human, and the rest, bacteria. It also talked about birthing processes’ impact on babies’ bacteria possession. Natural vaginal birth gives infants “a whole suite of maternal microbes,” which C-section does not offer. Furthermore, breastfeeding also provides good microbes for infants to build a strong immune system. 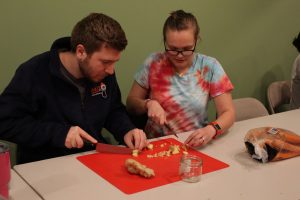 into the actual making of a ferment. People chopped up some vegetables, dumped them in a huge barrel, seasoned the vegetable with salt and finally added some water. Then it is done. After sealing the bottle, all you have to do is to wait for a month for the final product.

Many attendants were fascinated with the benefits of bacteria. Rosa Billen, one of the attendants, came with her friends Tracy Spiess and Leah Arnold. She said she was surprised by the simplicity of ferment making.

“I thought there would be more steps and more tricks and different temperatures and more like mad scientist-type stuff,” Billen said. “You just let nature do the work.”

Spiess said she loves everything natural and from the earth so fermentation fits that criteria perfectly.

“I think this is as old as ancient times, and it just seems like the right thing to do for my body versus all the influx of the processed and food dyes and everything that we are bombarded with,” Spiess said.

Arnold said it is one step toward a healthier lifestyle. She said people have to start realizing how one lives now can impact the rest of one’s life, so having that mindset in early years can be beneficial for the rest of their lives.