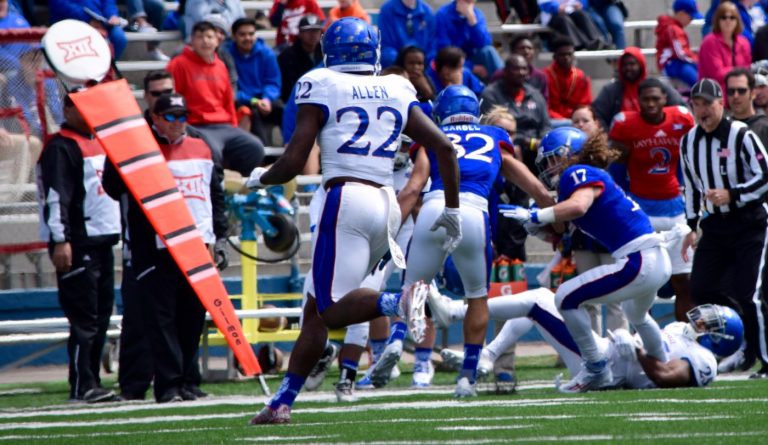 The Kansas State Wildcats denied Kansas football their first two-game win streak since the 2011 season, beating the Jayhawks 34-19 in Manhattan.

The Wildcats (7-4, 5-3 in Big 12) scored 27 unanswered points as their ground game chewed up the Jayhawk defense. The Wildcats ran for 342 yards and four touchdowns, including 103 yards and a score from senior running back Alex Barnes.

The Jayhawks showed they still have problems stopping the read-option, as quarterback Jesse Ertz amassed 99 yards rushing in just the first half before getting injured.

Freshman Alex Delton experienced similar success running the offense in the second half, adding 53 yards of his own on the ground.

Freshman quarterback Carter Stanley rebounded from two early interceptions, including a pick-six by senior cornerback Donnie Starks that gave the Wildcats a 13-3 advantage, completing 23 of 43 passes for 294 yards and two touchdowns.

Despite trailing by as many as 25 points, KU nearly made a game of it after Stanley hit junior wide receiver LaQuvionte Gonzalez for a 95-yard touchdown bomb late in the third quarter.

The Jayhawks were then successful on an onside kick attempt early in the fourth quarter, but failed to turn the extra possession into points.

KU’s aggressiveness eventually paid off as a 4-yard Mike Zunica touchdown reception and a 44-yard Wyman field goal helped reduce the lead to 15 with just over three minutes remaining.

The Jayhawks comeback ended as Stanley fumbled the ball away on a Trey Dishon sack late in the 4th quarter.

KU: Three turnovers from Carter Stanley. All of the Jayhawk starting quarterbacks this season have had a hard time holding onto the football. If Stanley hopes to parlay his late season efforts into an opportunity to edge out either next season’s redshirt freshman Tyriek Starks or junior college transfer Peyton Bender, he needs to work on protecting the football.

KSU: 342 rushing yards. The Wildcats put their head down and grinded their way to a victory on the back of 10.3 yards per carry from freshman running back Alex Barnes.

KU: The season is over and the Jayhawks got two wins. You know, two more than last year. The Jayhawks made bigger strides than their record shows. Young studs like sophomore defensive tackle Daniel Wise, freshman safety Mike Lee, and sophomore receiver Steven Sims, Jr. should make Jayhawks fans excited for the future.

KSU: The Wildcats pass offense was nearly non-existent, and they’ll need a little more balance if they want to beat TCU next week to reach eight wins. The Horned Frogs beat the Longhorns 31-9 by slowing down junior running back D’onta Freeman and forcing freshman Shane Buechele to beat them through the air.