Off the Mic: Schyler Merrills 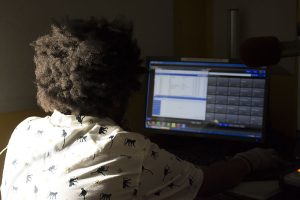 Kate Hartland: How did you get started at KJHK?
Schyler Merrills: When I first came here, this guy was talking about how he wanted a replacement for Radio Africa because he was graduating. So I told my friend Chad to do it. Chad’s the Art and Culture director now and he still does Radio Africa. But I was like, maybe I’ll try it later. So fast-forward to now, to me being able to come back to KU and coming back thinking: I should definitely try it again.

KH: Do you consider yourself an entertainer?
SM: Yes! I literally think that’s what I’m here to do. Literally just here to entertain you, whether you wanna laugh or cry or anything or be scared, that is, yeah, my life.
KH: So, do you perform your music that you work on?
SM: Not yet. I hope to. Just working on it, bare bones.
KH: Does that influence you as a DJ, having that background as well?
SM: Definitely. Cause I search for songs that I would like first of all, but songs that are really showcasing, because I sing more than anything, so really showcasing singers and stuff like that. And KJ’s really interesting, they have a lot of folk music, which I’ve never really been into that much before, but it’s introducing me to so many new genres. Having that background just makes everything else so much more interesting.
KH: Well and that probably also influences you a little bit.
SM: Yeah it does, a lot.
KH: So how has your music changed since you started here? Or has it at all?
SM: It’s changed a lot. Now if there’s an artist I see that I like one song, I’ll just be like, go to Spotify, download full album. Just gonna try the entire thing, you know. See if I like them, and then if I like more than that song, it’s like, alright, adding multiple albums. It’s definitely opened me up to appreciating different music and broadening whatever I’m doing creatively. 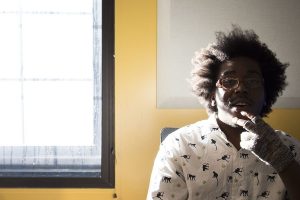 KH: If you could pick one dead musician to come back to life and release another album, who would it be?
SM: Okay, I need Jimi Hendrix to come back and do an album. He can see the world for what it is and do an album, it would probably change everything. Definitely somebody old like Ray Charles to come back, just wanna hear something great. I feel like that would be really great for our people, just to hear, all of America. Like yo, this is good music, remember this? Remember feeling good like this?

KH: I’m curious about your music. What genre would you say that it is?
SM: Usually something like soul or alternative, but with more beat-type influences, more bass and stuff like that. I always suck at picking genres. Hip-hop, older stuff. I really do have a huge taste for classic rock. Toto’s one of my favorite bands, and so is Queen. But other than that, new stuff. Being in KJ has kept me into newer stuff more because I really will just listen to the same old shit.
KH: What was the last song you listened to?
SM: It’s actually “Untitled 3” by Kendrick Lamar.

KH: I feel like people focus on negativity in the world, in 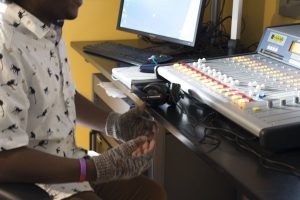 general, and not so much positive stuff. What is your favorite thing about humans?
SM: Humans are so cute! Honest to God. We do the oddest things, like when we’re curious about something we behave just like anything else. We’re just like oh, what’s that? And we’ll tilt our head and try to play with it or something. We’re just very interesting. We’re always intrigued by every little thing. if something’s new, we lose our shit. And we’re either scared about it or really down for it. We’re cute. We do stuff and we don’t know what we do. Sometimes we’re like oops, sorry. What else have we got? Human error, sorry!

KH: Is there anything else that you would like the wonderful followers of the KJHK community to know?
SM: I take a lot of inspiration from cartoons. One of the biggest inspirations right now, I swear, is Steven Universe. If you’re not watching that show…it’s really good. It has a lot of characters that are really gender-fluid. And the main character, out of all the people, these characters all have weapons, his weapon isn’t a weapon, it’s a shield. I think at this time period, we just need to think about the complications. We have so many different issues. Like hurting people, what it does to you. Someone who hurts is also hurt. And that show exemplifies that. You should check it out because it teaches you to be the better person.